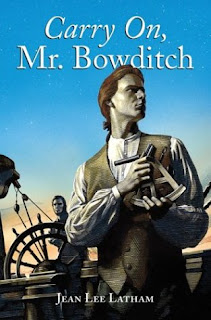 Synopsis from Goodreads: Readers today are still fascinated by “Nat,” an eighteenth-century nautical wonder and mathematical wizard. Nathaniel Bowditch grew up in a sailor’s world—Salem in the early days, when tall-masted ships from foreign ports crowded the wharves. But Nat didn’t promise to have the makings of a sailor; he was too physically small. Nat may have been slight of build, but no one guessed that he had the persistence and determination to master sea navigation in the days when men sailed only by “log, lead, and lookout.” Nat’s long hours of study and observation, collected in his famous work, The American Practical Navigator (also known as the “Sailors’ Bible”), stunned the sailing community and made him a New England hero.

I love this book and it has long been a favorite of mine and even more so after this re-read. I'm not a huge fan of math but I have always appreciated that it's straightforward. There's one right answer and only one! That is what Nat Bowditch, the hero of this book, loves about math too.
Nat's story is full of dedication and hard work. He gets passed the short straw when he's indentured until 21 though he shows great promise academically. However, Nat doesn't let that stop him from studying and learning. He learns multiple languages including Latin, which he learns so he can read Isaac Newton's Principe, which is written solely in Latin. Every time he learns a new language he gets a dictionary and a New Testament in that language and starts from the beginning. He had little to encourage him or help him. He had no bootstraps. Despite all of this Nat strove through many years using his talent and dedication to teach others and save lives.
In my opinion every student should read this and then think about how maybe they aren't so horribly after all. Some people need to learn to accept their, not so actually awful, fate and WORK.
My little rant.
Anyways, I could not recommend this book more highly. It teaches young men and women about the value of bearing with their place in life at the moment and undertaking to better themselves through their own endeavors and learning. Read it and then pass it on to your children!
Posted by Lois Tinúviel at 12:30 AM