For the 42 challenge I'll be reviewing the Doctor Who movie. 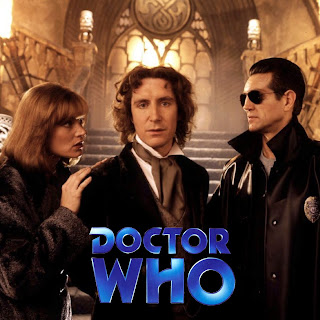 When I first heard about the Doctor Who movie I heard it wasn't that great... in fact awful. I thought people were probably overreacting.... they weren't. The movie was supposed to be an attempt to reboot the show... I see why it failed.
I liked Paul McGann as the Doctor... he was the best part of the movie. Sure the dialogue he was given wasn't great but he did the best he could with it. I would have loved to have seen him more as the Doctor besides that tiny clip before Day of the Doctor. I think with a good script he could have been a great Doctor. Also a nice nod to Sylvester McCoy in his little bit before he regenerates. Though that was the lamest way the Doctor has died yet!
The T.A.R.D.I.S. interior was interesting though... I'm not sure whether or not I like it or not... it was different.
The companion Grace Holloway wasn't bad but wasn't great. It's kind of cool that she's a medical doctor and that she was operating on the Doctor. I thought it a little funny how she ended up messing up the surgery because of his two hearts. When he pulls that probe out of himself though.....
The Master is the villain of the story but he was just super weird.... not in a funny way like in the New Who but in a really creepy and utterly stupid way. I was not at all taken with him... not that you're really supposed to like the Master but the whole thing with him was ridiculous.
Chang Lee the young Chinese-American just doesn't make any sense. Why is he there and why do we care? This of course brings us to the whole Eye of Harmony thing and that the Doctor is half human. I'm not sure I'm totally against the Doctor being half human though I know it's a controversial point and one fans like to pretend didn't happen. I don't think the movie is considered canon so we can pretend it didn't happen if we want to. ;) The Eye of Harmony thing though was just weird and dumb.
I think the film just suffered from a bad script and not the greatest acting jobs.
If you're a Doctor Who fan you might enjoy watching it just to see what it's like but you'll probably be disappointed. If you're not a Doctor Who fan... you'll just be confused and probably never want to watch Doctor Who so don't because I promise you the show is so much better!

Follow my blog with Bloglovin
Posted by Lois Tinúviel at 1:00 AM