For the Victorian Bingo challenge, Mount TBR challenge and Classics Club I read Anthony Trollope's novel Doctor Thorne, which is the third in his Barchester series. 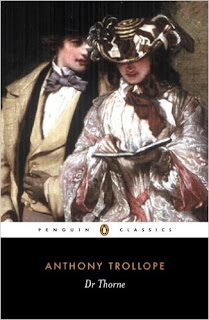 Goodreads Synopsis: Doctor Thorne, considered by Trollope to be the best of his works, is a telling examination of the relationship between money and morality. It recounts the story of the son of a bankrupt landowner, Frank Gresham, who is intent on marrying his beloved Mary Thorne despite her illegitimacy and apparent poverty. Frank's ambitious mother and haughty aunt are set against the match, however, and push him to make a good marriage to a wealthy heiress. Only Mary's loving uncle, Doctor Thorne, knows of the fortune she is about to inherit - but believes she should be accepted on her own terms. The third book in the Chronicles of Barsetshire.

Certain rich, snobby and hypocritical people in this book made me very, very frustrated. Thankfully there were enough good characters to balance them out fairly well. I love Trollope's little running commentary during the novel. It makes me smile. :) As Trollope points out at the beginning, you might think Frank Gresham is the hero but Doctor Thorne is his hero. Personally I'd agree with Trollope. Doctor Thorne is more hero material. Frank is alright but he's kind of silly sometimes but he does grow up somewhat. I think there are far better heroes in literature than him though.... Doctor Thorne being one of them. Doctor Thorne is honest, hardworking, kind and loyal. I love how he looks after Mary. I don't pity the situation he's put into though and I think he handles it admirably. Mary I also like and I personally think she's better than Frank and definitely more level headed then him but even then she's not a top heroine for me in literature. Overall it was great classic Trollope writing and an enjoyable story. I hope I'll be reading much more Trollope in the future. :)
Fun side note but I noticed when looking on IMDB to see if there was a movie of this book that they're actually making a TV series of it in 2016! I don't know anything more than that except that Tom Hollander (Osborne in Wives and Daughters and Mr. Collins in the 2005 version of Pride and Prejudice) plays Doctor Thorne. :)