This year I've managed to watch the TV show Firefly twice! For the 42 Challenge I'll be reviewing it. Firefly is a sci-fi show with a western flair to it made by Joss Whedon. First off, Firefly is a really great with lots of humor and I love watching it but it has a lot of inappropriate content. My mind tends to automatically bleep out bad words so that's one problem solved and then I dim the screen on my computer for inappropriate sex scenes. The inappropriate sex scenes are what I have the most problem with in the show. While there are quite a few they don't show anything explicit at all. Violence and gore I can handle for the most part. 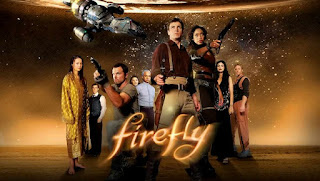 Here's a character run down.

The captain of the ship Serenity, a smuggling ship. During the Civil War fought between the Alliance and the Independents (aka the Browncoats) he fought with the Browncoats but they lost. As he says, "May have been the losing side. Still not convinced it was the wrong one." He has his own moral compass but is fiercely loyal to his crew.

Mal's second mate on Serenity. During the war she fought with Mal and is a very capable fighter. She's married to Wash.

The pilot of Serenity. He's married to Zoe. He's lots of fun and adds lots of laughs.

Inara is a Companion, which is 26th century speak for a high class prostitute. She adds a lot of the inappropriateness to the show. She flies with the ship to add a sense of respectability to it plus as she will admit she likes the adventure.

The man they call Jayne. :) Jayne is basically a hired gun, a mercenary and he is indeed very mercenary. His moral compass is quite off but he's loyal to Mal. He will make you laugh often.

Kaylee is the ship's mechanic. She has a big heart and genuinely loves everybody. She is always happy and is always trying to cheer everyone up. I like her a lot. :)

A very gifted trauma surgeon. Currently he is on the run from the Alliance after rescuing his sister River from their school where the Alliance was experimenting on her brain in secret. He shows so much love and care for his sister that I personally find beautiful. :) He takes refuge with the crew of the Serenity and becomes their Doctor.

The incredibly gifted sister of Dr. Simon Tamm. At the Alliance school where she went her genius was recognized and they experimented on her brain in secret until Simon found out about it and rescued her from there. Now she is on the run from the Alliance with her brother. Throughout the show her various abilities are shown such as how she has psychic power, she's very intuitive and is also an incredibly fighter. However due to what the Alliance did to her she will have fits of delusions, anxiety and flashbacks making her sometimes erratic.

Book is a Shepherd, which is basically a pastor. He takes ship with the Serenity and tries to add some morality to their lives. He's very devout but shows a surprising amount of knowledge about military tactics, the government and weapons.

Here's an episode by episode run down. There was sadly only one season of this show though there was was a movie spin off made in 2005 as well which was great.

Synopsis from Wikipedia: Malcolm Reynolds is a veteran and the captain of Serenity. He and his crew are smuggling goods, but they need to pick up some passengers for extra money. However, not all the passengers are what they seem.
A very fun first episode with great introductions to all of the characters. One inappropriate scene with Inara as well as when you first meet River she's nude but cruel up in a ball so you don't see anything horrible.

Synopsis from Wikipedia: The crew of Serenity takes on a train heist commissioned by a crime lord. They steal the goods, only to find it is medicine that is desperately needed by the town.
Lot's of fun!

Synopsis from Wikipedia: Serenity is pulled in by an Alliance cruiser while investigating a spaceship that was attacked by Reavers. Simon and River must hide to prevent capture, while something is wrong with the lone survivor of the attacked spaceship.
You get to learn more about the Reavers in this episode. It's lots of fun. :)

Synopsis from Wikipedia: Inara attends a formal society dance, only to find Malcolm there as well, attempting to set up a smuggling job. Mal comes to blows with Inara's conceited date and finds himself facing a duel with a renowned swordsman, and only one night to learn how to fence.
This is a very fun episode with plenty of Kaylee, who I love. :) One inappropriate scene with Inara.

Synopsis from Wikipedia: Mal must choose which crew members to save when one is gravely wounded and two others are kidnapped. Simon finds an uneasy haven in a remote village, but River's uncanny perceptions jeopardize the Tams' temporary safety.
You begin to see more of River Tamm's abilities in this one, most importantly her psychic abilities.

Synopsis from Wikipedia: As an unexpected reward for an unpaid job, Mal finds himself married to a naïve, subservient young woman named Saffron. The crew are amused at his discomfort and Book lectures him on propriety, but things are not as smoothly straightforward as they thought them to be.
I love this episode! It is SO funny! Unfortunately it also has a fair amount of inappropriateness but specifically in one scene.

Synopsis from Wikipedia: Returning to a planet where he ran into some serious trouble years ago, Jayne discovers that he has become a local folk legend. Mal decides to use this entertaining distraction to complete a job, but some unfinished business may derail his plans.
Maybe the funniest episode. You also get to learn a lot more about Jayne in this one. One inappropriate scene with Inara.

Synopsis from Wikipedia: After Serenity suffers a catastrophe that leaves her crew with only hours of oxygen, flashbacks show how Mal and Zoe acquired Serenity and assembled their motley crew.
I absolutely loved learning more about the crew in this one. You get most all of their backstories as well as learning about when Mal and Zoe first found Serenity. One inappropriate scene in this one but very short and you don't really see anything.

Synopsis from Wikipedia: Hard up for cash, Serenity takes on a job from Simon: help him get a thorough diagnostic of River in return for the opportunity to loot the vast medical stores of an Alliance hospital on central world Ariel. But River's pursuers are hot on their trail, and they receive some unexpected inside help.
You learn more about what the Alliance did to River. This episode is fun and funny but also gets dark at the end (spoilers!). One of the nice aspects of this one is that Inara is away for most of it so really no inappropriate content. :)

Synopsis from Wikipedia: Angered at Zoe's unshakable war connection to Mal, Wash demands a shot at a field assignment. Unfortunately, crime lord Niska chooses this moment to exact a brutal vengeance for Mal's failure to complete an earlier job.
This is the most gory episode and it's very intense. Not for the faint of heart. ;) This episode explores a question I asked my dad earlier in the season "Does Wash every get jealous of Zoe's loyalty to Mal?". Yes, yes he does. A little unfairly so, but he does. I think he got straightened out after this episode though. :) I've got to say now while I'm thinking about it that I think Wash and Zoe are such an adorable couple! Again your see more of River's abilities in this one. Of major note with inappropriateness Inara has a female client in this one with an inappropriate scene. :(

Synopsis from Wikipedia: Saffron returns to plague Serenity with a scheme to steal a rare antique weapon from a wealthy landowner. Unfortunately for Mal, she neglects to mention just how she came across the information needed to break into the landowner's home.
Ah Saffron. A fun episode but there is nudity from the back shown at the very beginning and then again at the very end for just a little bit. :(

Synopsis from Wikipedia: A former Independence soldier who had served with Mal and Zoe returns in a dramatic manner, with a vicious Alliance officer chasing after him for some unusual smuggled goods.
This is almost my least favorite of the episodes (my least favorite is to come). It's good but it's just not great.

Synopsis from Wikipedia: A Companion-trained friend of Inara's who runs a brothel on a remote planet calls for help from Serenity when a local bigwig reveals his intentions to take the baby from a girl he impregnated.
My advice.... skip this episode. My brother recommended I do it but I didn't. I regret that. Since it takes place in a brothel it just gets so much more inappropriate than the others and it wasn't nearly as good as the others and it wasn't really funny and overall it just wasn't worth it.

Synopsis from Goodreads: Serenity encounters a ruthlessly professional bounty hunter, Jubal Early, who will stop at nothing to retrieve River. But River, feeling unwelcome on the ship, takes a novel approach to escaping from the long arm of the Alliance.
A very good conclusion to the season. Early is a fascinating villain and it's amazing to see River work against him.

So there's my mini reviews! I really love this show but as I said one inappropriate scene per almost every episode plus innuendo every once and awhile makes it difficult to watch. :( If you watch it, watch with caution and not around your kids. I'll be reviewing the movie the movie Serenity that was made as a spin off the show in the future. :)
Follow my blog with Bloglovin
Posted by Lois Tinúviel at 11:21 AM