Book Review- The Mill on the Floss

For the Classics Club I read George Elliot's novel The Mill on the Floss. 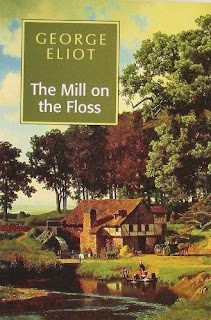 Synopsis from Goodreads: Brought up at Dorlcote Mill, Maggie Tulliver worships her brother Tom and is desperate to win the approval of her parents, but her passionate, wayward nature and her fierce intelligence bring her into constant conflict with her family. As she reaches adulthood, the clash between their expectations and her desires is painfully played out as she finds herself torn between her relationships with three very different men: her proud and stubborn brother, a close friend who is also the son of her family's worst enemy, and a charismatic but dangerous suitor. With its poignant portrayal of sibling relationships, The Mill on the Floss is considered George Eliot's most autobiographical novel; it is also one of her most powerful and moving.

I think I'm getting a better appreciation for George Elliot with each book of her's I read. I don't love her and I doubt I ever will, but I do find her books thought-provoking and beautifully written. I actually listened to Mill on the Floss via audiobook which I really enjoyed and of course made for a slightly different reading experience.
Maggie, the main character of the story, is absolutely intriguing and her arc drives the story. Her different roles as a daughter, sister, friend and lover push and pull her in all directions as she tires to navigate life and it's trials. She's a relatable character, making poor decisions as she strives to make the right ones. She yearns for love and acceptance. Her goal is to please everybody.  I didn't totally like Maggie and oftentimes I was like "what did you just do!" However I couldn't help but pity her.
The other characters in the story were intriguing as well. Her mother and all of her mother's family were the typical hypocritical English snobberies and fops (not quite gentry but proud enough to be) that irked and amused you to no end. Her father was an intriguing blend of passionate outburst and endearing love. In the end he ends up a rather bitter and pathetic man. But again you kind of pity him. One of the most interesting relationships in the story is between Maggie and her brother Tom. You watch Tom develop through the story. He goes through many of the same trials Maggie does but his personality dictates very different reactions, which cause him to grow up a harder person who sees the world as very black and white.
Then there's the contrast between Maggie's two suitors. Phillip Wakem is the deformed son of Maggie's father's rival. Maggie loves him first as a child for his kindness to her brother Tom and then later forms a forbidden attachment to him partially out of pity and partially out of true love. Phillip loves her deeply and is also a good friend to her advising her and supporting her through her life. He's not very good at being self-encouraging though and let's his deformity depress and control him. He thinks very little of himself. He does work to better himself in his studies and is quite artistically talented. Overall I like Phillip but he basically begs Maggie to love and marry him, guilting her into the attachment in some ways. Maggie really does like him but as their fathers are rivals she sees the attachment as impossible but Phillip is unwilling to accept that answer.
Maggie's other suitor is Stephen Guest, who you are introduced to as the suitor of Maggie's cousin and good friend Lucy. Stephen and Lucy are basically engaged when Maggie comes on the scene. Almost as soon as Stephen is introduced to Maggie though he is enraptured by her and looks to be noticed by her often, something that Lucy is oblivious to but Maggie picks up. Maggie doesn't know what to think at first but as time goes on becomes seduced by Stephen's wit, charm and physical attractiveness. She denies these feelings though as she considers herself promised to Phillip and Stephen is basically engaged to Lucy. Stephen continues to push the limits of their friendship though until he gets her to admit that she has feelings for him. I don't want to give away how that concludes but let me just say that I find Stephen to be deplorable. He's manipulative and pathetic, thinking only of himself over and over again. While I do not find Maggie's character to be spotless in what happens she does really strive to do the right thing and tells Stephen no over and over again but Stephen keeps pushing her and trying to seduce her. I really loathe him. Enough of him though! Understand I hate him!
One more character I'll mention before I close this review is Bob Jakin, a childhood friend of Tom's who returns when he is older and helps the family over and over again out of the sweetness of his heart. He's kind of an adorable character and you can't help but love him. He's compassionate and generous but also brings a sense of comic relief to the book. He's easily the best character in the book.
There's so many other interesting characters and so much else you could say about this book but I couldn't possibly cover it all. I didn't love this book but I enjoyed it quite a bit. I'm sure I'll revisit it again sometime in the future and glean even more from it.

For the Classics Club I read Charles Dickens' first novel The Pickwick Papers. 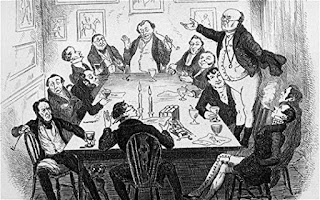 Synopsis from Goodreads: Few first novels have created as much popular excitement as The Pickwick Papers–-a comic masterpiece that catapulted its 24-year-old author to immediate fame. Readers were captivated by the adventures of the poet Snodgrass, the lover Tupman, the sportsman Winkle &, above all, by that quintessentially English Quixote, Mr Pickwick, & his cockney Sancho Panza, Sam Weller. From the hallowed turf of Dingley Dell Cricket Club to the unholy fracas of the Eatanswill election, via the Fleet debtor’s prison, characters & incidents sprang to life from Dickens’s pen, to form an enduringly popular work of ebullient humour & literary invention.

A couple years ago there was a challenge I tried to participate in that consisted of reading The Pickwick Papers as they were originally published in serial form. I did not get very far before I gave up... something I very rarely have ever done. Maybe it was the pace of reading it or it just wasn't time. However, recently I decided to pick it up again and thankfully I was not only able to finish it but I enjoyed it. It's a quirky book and definitely not for everyone. It starts out slow and it needs warming up to. Like most of Dickens' novels, the characters drive the story and they are each an oddity. It took me a while to warm up to them because they're so ridiculous but you come to love them all. The style of the story is different as well as it kind of meanders with the characters moving about and having "adventures" as the travel about. It's just a laid back story.
What I enjoyed most about The Pickwick Papers though was the humor hidden in the writing... that delightful British humor. Some of it quite reminded me of P.G. Wodehouse, who's of course one of my favorite comedic authors. I had to read some of the quotes aloud to my husband as they were just so funny! I've read a lot of Dickens' novels (almost all of them now!) and I feel like it might be the funniest of them all but since it's such a rambling read it takes more commitment then probably most are willing to put in to a book. It's just not a normal Dickens novel. Granted it was his first though and you can tell that in how it was written. The writing, while more humorous in my opinion, wasn't as good. He finessed his work with time.
All that to say, I enjoyed it a lot, it's slow to get in to, but it's worth it, but definitely not for everybody.
Here's a few of my favorite quotes from it, though I know there were many other good ones hidden in the pages that I've missed.


“The gout is a complaint as arises from too much ease and comfort. If ever you're attacked with the gout, sir, jist you marry a widder as has got a good loud woice, with a decent notion of usin' it, and you'll never have the gout agin.... I can warrant it to drive away any illness as is caused by too much jollity.”

“She dotes on poetry, sir. She adores it; I may say that her whole soul and mind are wound up, and entwined with it. She has produced some delightful pieces, herself, sir. You may have met with her 'Ode to an Expiring Frog,' sir.”

“Can I view thee panting, lying
On thy stomach, without sighing;
Can I unmoved see thee dying
On a log
Expiring frog!”

“Hush. Don't ask any questions. It's always best on these occasions to do what the mob do."
"But suppose there are two mobs?" suggested Mr. Snodgrass.
"Shout with the largest," replied Mr. Pickwick.
Volumes could not have said more.”

“There are very few moments in a man's existence when he experiences so much ludicrous distress, or meets with so little charitable commiseration, as when he is in pursuit of his own hat.”

“Mr. Pickwick gazed through his spectacles for an instant on the advancing mass, and then fairly turned his back and -- we will not say fled; firstly because it is an ignoble term, and, secondly, because Mr. Pickwick's figure was by no means adapted for that mode of retreat...”

“Mr Pickwick awoke the next morning, there was not a symptom of rheumatism about him; which proves, as Mr Bob Sawyer very justly observed, that there is nothing like hot punch in such cases; and that if ever hot punch did fail to act as a preventive, it was merely because the patient fell in to the vulgar error of not taking enough of it.”