For the Mount TBR challenge, the Hard Core Re-reading challenge and the Author A-Z Challenge I re-read Chaim Potok's novel The Chosen. 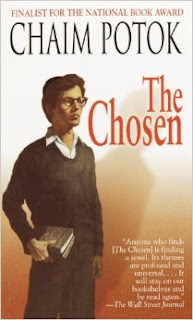 Synopsis from Goodreads: It is the now-classic story of two fathers and two sons and the pressures on all of them to pursue the religion they share in the way that is best suited to each. And as the boys grow into young men, they discover in the other a lost spiritual brother, and a link to an unexplored world that neither had ever considered before. In effect, they exchange places, and find the peace that neither will ever retreat from again.

This is such a beautiful and well thought out book. I learned so much about Judaism from it. It's also a sad book. Oddly enough I never really though much before about how Jews in America felt during World War II. As I was able to learn from this book it was hard for them not being able to help their comrades and hearing about what was basically their family being slaughtered over in Germany.
But that isn't so much what the book is about as much as it is about a father and his son and another father and his son and how they interact. I'm not sure I can even begin to describe their relationships but I think we can just say they're complicated. Reuven and Danny's friendship was the best thing that could happen for either of them and was probably the best relationship in the whole book, though  Reuven's and his Dad's relationship was pretty good.

I'd highly recommend this book as I'm not sure a review can give it full justice or really explain it.