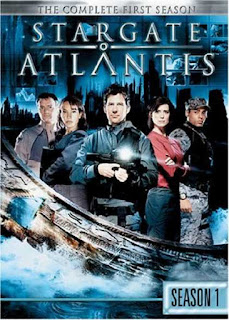 Last year I watched Stargate Atlantis myself and LOVED it. Now I'm rewatching it with my siblings and we are all enjoying it. This is my review of the season one episodes for the 42 Challenge.


Synopsis of first season from Wikipedia: The first season is about a military-science expedition team discovering Atlantis and exploring the Pegasus Galaxy. However, there is no way to return home, and they inadvertently wake a hostile alien race known as the Wraith, whose primary goal is to gather a fleet to invade Atlantis and find their new "feeding ground", Earth.

A little about the characters. I love them all! Probably my least favorite of the main characters is Elizabeth Weir (the base commander) but I still like her. My favorites are John Shepherd (the military commander), Rodney Mckay (the scientist) and Dr. Carson Beckett (the medical doctor). I also love Teyla (fighter) and Sergeant Ford (military weapons expert) though.

This is a great introduction to the Stargate universe if you haven't seen the movie or Stargate SG-1 (I had only seen the first season of SG-1 before seeing Atlantis). It introduces all of the main characters as well as the enemy the Wraith... which I think are perfect villains for the show!

This is just a really fun episode. There's nothing really in it to move forward the plot... it's just hilarious! Mckay is one of my favorite characters and he's so funny in this one as well as of course Shepherd. "You shot him?" "In the leg!"

This episode introduces Zelenka who is awesome and plays off of Mckay so well. This one is intense and fun and you start to learn a little more about the Wraith with it too.

A good episode and it helps to solidify Teyla as a member of the team.

This one is kind of disturbing but Mckay trying to interact with the children makes up for that so it ends up being a pretty good episode.

You get to see more of Dr. Beckett in this one. I'm a huge fan of Beckett so I love that. A good episode.

This episode introduces the Genii, who love to pop up at odd moments and make life difficult for the team. A fun episode with lots of repercussions.

I like this episode but some don't. It's an intriguing one and as someone who had seen it before it was interesting to watch my siblings try to figure it out.

The Storm and The Eye

A two parter. These episode are very good and they bring back those pesky Genii. Kolya is a great villain and he really raises the odds.

Another great episode. I love watching Shepherd use his military skills to take on the Wraith.

At the beginning of the show you learn a little about how Shepherd isn't always good about following orders and you see that play out in this episode. Mckay has some funny moments in this one. "Tell them I died saving children." :)

Not my favorite episode but enjoyable. No romance please. :)

A fascinating episode with some time travel, which, as we all know, is very Lois approved. I enjoy this one.

That pesky Kolya with his Genii buddies shows up again! Mckay has some great moments when he's so oblivious to the fact that the lady has a crush on him. :)

I like this episode a lot. It's beautifully sad and funny to see the messages that they all send back to their families. Mckay's message is the best!

Let's just say Teyla as a Wraith is creepy looking! It's an interesting introduction to her "gift" though.

A gripping conclusion with plenty of cliffhangers! But Ford!!!!! That just broke my heart! If you've seen it you know what I mean. Ford is awesome.