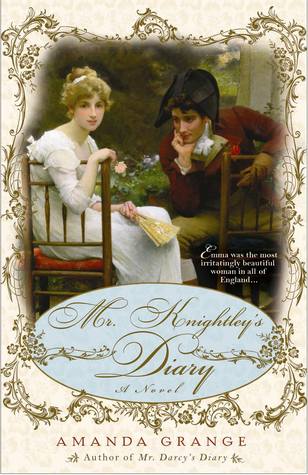 
Synopsis from Goodreads: Relive Jane Austen's Emma- from Mr. Knightley's point of view. Between managing his estate and visiting his brother in London, Mr. Knightley is both exasperated and amused by his irresistibly beautiful, outrageously mischievous neighbor, Emma Woodhouse, whose misguided attempts at matchmaking are wreaking havoc in the village of Highbury. But when a handsome newcomer arrives and catches Emma's attention, Mr. Knightley is shocked by his reaction. Amusement gives way to another emotion entirely-for his unreasonable dislike of the handsome newcomer seems suspiciously like jealousy.

Mr. Knightley is just about my favorite Austen hero (tied with Henry Tilney) so I was excited to read this one, as well as fervently hoping Grange didn't mess him up. She didn't. :) When I re-read Emma last year it became one of my favorite of Austen's novels, a place it hadn't previously held. This was mostly due to Mr. Knightley, a hero I had always liked but now had come to love. Getting his inside scoop on Emma was humorous and insightful. Going into the book I kind of felt like we (the readers) already kind of knew most of what Mr. Knightley was thinking. Amanda Grange did a great job though of bringing that out, adding her own little flair though of course. It was kind of adorable how Knightley was totally oblivious to the fact that he was in love with Emma for the longest time! It was interesting how Grange had him kind of on the lookout for a wife. Naturally he could find no one better than Emma, though it took him a while to realize that. I also liked you saw more of Emma's good qualities through Knightley's eyes as if you're like me you spent most of Emma infuriated with her. It was nice to get a fresh perspective on her. Of course Knightley is her biggest critic but he also loves her and sees her good qualities and brings them out.
Overall I enjoyed Mr. Knightly's diary and it was a great addition to Amanda Grange's Diary series.