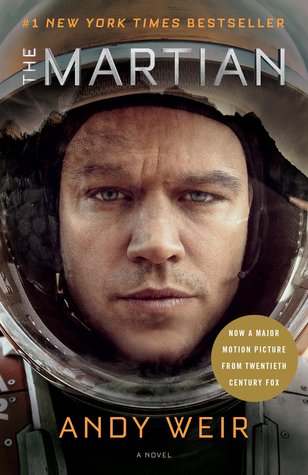 For the Full House Reading Challenge I read Andy Weir's novel The Martian. It should have counted for the Shelf Love and Mount TBR challenges too but I didn't buy it until February. :(


Synopsis from Goodreads: Six days ago, astronaut Mark Watney became one of the first people to walk on Mars. Now, he's sure he'll be the first person to die there. After a dust storm nearly kills him and forces his crew to evacuate while thinking him dead, Mark finds himself stranded and completely alone with no way to even signal Earth that he’s alive — and even if he could get word out, his supplies would be gone long before a rescue could arrive. Chances are, though, he won't have time to starve to death. The damaged machinery, unforgiving environment or plain-old "human error" are much more likely to kill him first. But Mark isn't ready to give up yet. Drawing on his ingenuity, his engineering skills — and a relentless, dogged refusal to quit — he steadfastly confronts one seemingly insurmountable obstacle after the next. Will his resourcefulness be enough to overcome the impossible odds against him?

I'm going to preface this review with I loved it BUT it had a lot of bad language. I knew that going into it but I maybe underestimated how much bad language there would be. In retrospect I really wish I'd used white out when reading it as I think my brother would enjoy it. Unfortunately I was reading it in my downtime at work so I didn't have any around. :(
I love a good castaway story and that's basically what The Martian is... only it's castaway on Mars! The odds go up quite a lot. :)
The main character Mark Watney is humorous and determined. He's also incredibly smart. His mechanical engineering and botanist background give him a good headway in surviving. The book is pretty packed with science but personally I loved it. Sure most of it went over my head but I still loved it. It was amazing as everything kept going wrong he just kept going. He was determined to live. With each new obstacle the question was always "What will Watney do now?" and every time he delivered!
He also had a great team helping him though. There was NASA back on earth and also his crew on their return trip to earth. While so much of it was a one man show with Watney wowing us I was also continually impressed by the others. Sometimes though NASA could be a dolt.
To close out this review here are some favorite quotes. I'm telling you this guy is hilarious!


"I could cut off my arm and eat it, gaining me valuable calories and reducing my overall caloric need. No, not really."

"Half ration for dinner. All I accomplished today was thinking up a plan that'll kill me, and that doesn't take much energy."

"Also, I have duct tape. Ordinary duct tape like you buy at a hardware store. Turns out even NASA can't improve on duct tape."

"It (his computer) died instantly. The screen went black before I was out of the airlock. Turns out the 'L' in LCD stand for liquid. I guess it either froze or boiled off. Maybe I"ll post a consumer review. 'Brought product to surface of Mars. It stopped working. 0/10'. "

So read or not? I'm not sorry I read it and I'm excited to watch the movie sometime soon. However, one has to be careful with this book as it is loaded with bad language. I'm not sure I would ever again pick up a book with that much bad language. I kind of made an exception for it. I did love it but you do have to watch out. So whether you read it or not is up  to you and what you feel comfortable exposing yourself to. Personally I enjoyed it. :)