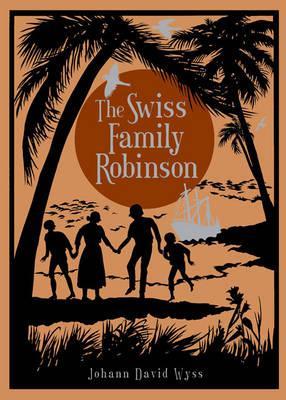 For the Hard Core Re-Reading Challenge and the Audiobook Challenge I re-read (listened) to Johann Wyss's classic castaway tale The Swiss Family Robinson.


Synopsis from Goodreads: One of the world's best-loved stories of shipwreck and survival, The Swiss Family Robinson portrays a family's struggle to create a new life for themselves on a strange and fantastic tropical island. Blown off course by a raging storm, the family-a Swiss pastor, his wife, their four young sons, plus two dogs and a shipload of livestock-must rely on one another in order to adapt to their needs the natural wonders of their exotic new home. Inspired by Daniel Defoe's Robinson Crusoe, this classic story of invention and adventure has fired the imaginations of readers since it first appeared in 1812.

When I first read this years ago as a kid I wasn't too crazy about it. This, I will admit, was mostly due to the fact that I grew up with the classic Disney film, which I loved, and the book was not like the film. I was disappointed. My two older siblings though loved the book and the movie despite the differences and insisted I needed to re-read it. It's taken me a long time to get around to it and I've now finally re-read it. Sad thing is, I'm still not that crazy about it.
I have no memory of why I originally did not like it besides it not being like the movie but here's why I did not like it this time around. Plain and simple... it was super sanctimonious and preachy. In my opinion, Little Women is sanctimonious and preachy sometimes and well I think Swiss Family Robinson is worse. This is really just my opinion though here but it just annoyed me the whole time. It might not have helped that the narrator of the audiobook sounded sanctimonious but maybe that was just because of the lines he was given. Yes, obviously I'm a Christian, very strongly so, but I don't want my books to bash me over the head with their morals. I guess I prefer my Christianity in my books and movies to be subtler. For example, in the movie they are Christians and you know that but you don't get it rammed down your throat the whole time.
So that's what I didn't like it but here's what I did like. I love a good castaway story. Robinson Crusoe (which this book is halfway based off of) is a favorite of mine and I really enjoyed Mysterious Island as well. As far as castaway stories goes it is pretty good. They do have a lot of supplies garnered from the ship so they are off to a good start but they use a lot of ingenuity to build their life on the island. I was a little upset that they had the cool treehouse (like in the movie) but then they end up moving to a cave because it was even better. No! Treehouses are way cooler! They did build a spiral stair case inside the trunk of the treehouse though. That was pretty neat.
Okay a couple more qualms. I felt like the dad knew everything about everything. Candle making? He's got it! Boot making? He's got it? Don't know what that animal is? He knows! Don't know what that plant is? He knows! Secondly, I felt like the island kind of handed everything to them on a platter. They found sugar cane, cotton, rubber and more! Basically everything you'd ever need! Really roughing it aren't we? Sorry, getting cynical again.
A note on the movie. I love it and it's a must watch! :)
I did like it okay but it just wasn't great. I gave it three stars on Goodreads. Read or not? Hard to say. If you want to give your kids a fun and interesting book that has good christian morals and is clean than go for it. It does have its merits.
P.S. I also can't quite forgive it for totally downplaying the romance! Not a romantic here but seriously!