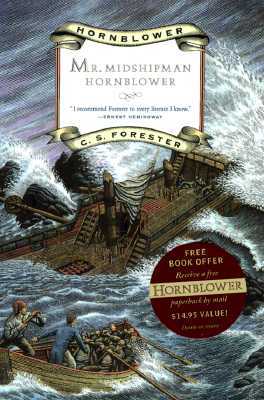 
Synopsis from Goodreads: Here we meet Horatio Hornblower, a young man of 17, in this Volume #1 of what becomes the 11 volume set about the career of this British Naval officer fighting against Napoleon and his tyranny of Europe as an inexperienced midshipman in January 1794. Bullied and forced into a duel, he takes an even chance. And then he has many more chances to show his skills and ingenuities - from sailing a ship full of wetted and swelling rice to imprisonment and saving the lives of shipwrecked sailors. And along the way, he fights galleys, feeds cattle, stays out of the way of the guillotine, and makes friends with a Duchess. Here Hornblower becomes a man and develops the strength of character which will make him a hero to his men, and to all England.

I watched the Horatio Hornblower TV series several years ago and really enjoyed it and finally now I'm getting around to reading the books. So far I've just read this first one but I hope to read the rest eventually.
While reading it I really related to Hornblower. His first experiences running a ship and then feeling like he failed felt like my first experiences as a nurse. Eventually we both gained confidence and skills necessary to survive our unfamiliar environments and they became familiar to us.
I was surprised at how fast paced the book was. Many "classic adventure novels" I've read haven't been as fast paced as I wanted them to be but this one pleasantly surprised me. The nautical terms didn't bog me down, though, through my previous reading, I have become familiar with some of them. There was also a historical aspect, which I always enjoy.
Overall I enjoyed it and I will probably hand it to my brothers in the future.