Book Review- The Secret Thoughts of an Unlikely Convert 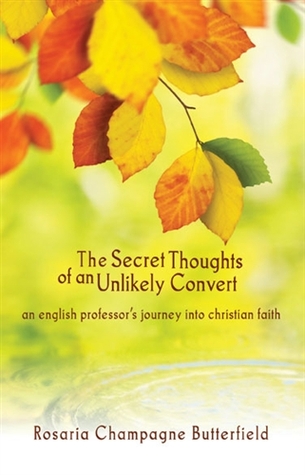 
Synopsis from Goodreads: Rosaria, by the standards of many, was living a very good life. She had a tenured position at a large university in a field for which she cared deeply. She owned two homes with her partner, in which they provided hospitality to students and activists that were looking to make a difference in the world. There, her partner rehabilitated abandoned and abused dogs. In the community, Rosaria was involved in volunteer work. At the university, she was a respected advisor of students and her department’s curriculum. And then, in her late 30s, Rosaria encountered something that turned her world upside down—the idea that Christianity, a religion that she had regarded as problematic and sometimes downright damaging, might be right about who God was, an idea that flew in the face of the people and causes that she most loved. What follows is a story of what she describes as a “train wreck” at the hand of the supernatural. These are her secret thoughts about those events, written as only a reflective English professor could.

I've been meaning to read this book for a couple years now and thankfully I've finally gotten around to it. I've got to say first off this is one of the best books I have ever read. It surprised me by not being just about homosexuality but also about marriage, adoption and what it is like to be a Christian. It's one of those books I think every Christian should read but definitely one that I wouldn't just hand to my teenager.  It's mature but not unnecessarily so. It's very real. After reading it you feel like you know Rosaria. She lays out her life, the ups and downs the struggles she went through. Struggles I think anyone can relate to. That's what makes this book so amazing. You may not be a recovering lesbian but you can relate to the struggles Rosaria goes through and learn. Sin is sin.

There's so much to say about this book but really the bottom line is to read it. I'll just close with a few of my favorite quotes.

"How do we put Christ at the center? By intentionally holding all things captive to Christ, each moment of each day. By never daring to do anteing without fervent prayer, seeking the Lord's wisdom, counsel, blessing and life-sustaining breath. I learned during those years that the idea that one is ever too busy to pray is delusion of the most dangerous variety."

"Rahab the Harlot, Mary Magdalene. We love those women between the pages of our Bible, but we don't want to sit at the Lord's Table with them-with people like me-drinking from the a common cup. That's the real ringer: the common cup- that is, our common origin in depravity. We are only righteous in Christ and in Him alone. But that's a hard pill to swallow, especially if you give yourself kudos for good choices."