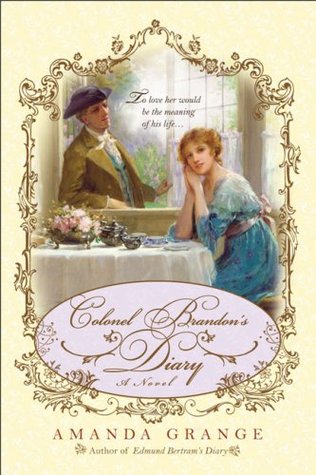 
Synopsis from Goodreads: At the age of eighteen, James Brandon's world is shattered when the girl he loves, Eliza, is forced to marry his brother. In despair, he joins the army and leaves England for the East Indies for the next several years. Upon his return, he finds Eliza in a debtor's prison. He rescues her from her terrible situation, but she is dying of consumption and he can do nothing but watch and wait. Heartbroken at her death, he takes some consolation in her illegitimate daughter, who he raises as his ward. But at the age of fifteen, his ward goes missing. Devastated by the thought of what could have happened to her, he is surprised to find himself falling in love with Marianne Dashwood. But Marianne is falling in love with the charismatic Willoughby...

As with Mr Darcy's Diary, I really enjoyed looking at what could have been in our Austen hero's diary. Sure it's just speculation but it's well done speculation. The book begins with Colonel Brandon as a young man falling in love with Eliza, his fathers ward and the heartache and disappointment that therein followed. Then it skims over his career in the militia until we reach the events of our old favorite Sense and Sensibility.
I've always loved Colonel Brandon; he's the true hero of Sense and Sensibility, let's face it. This brings his story to life. After reading it I felt even more how perfectly him and Marianne were suited to each other. Overall it was quite well done and enjoyable. :)