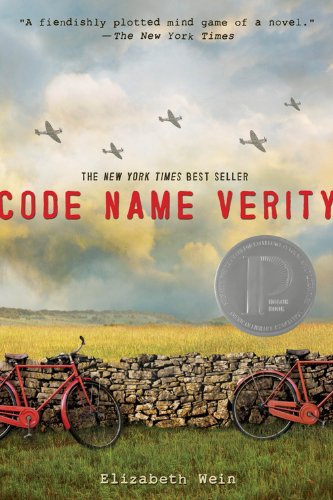 I've been meaning to read Code Name Verity for a while now so it's fitting I started the year out with it. I read it for the Shelf Love challenge, the Full House challenge and the Mount TBR Pile Challenge.


Synopsis from Goodreads: Oct. 11th, 1943-A British spy plane crashes in Nazi-occupied France. Its pilot and passenger are best friends. One of the girls has a chance at survival. The other has lost the game before it's barely begun.When "Verity" is arrested by the Gestapo, she's sure she doesn't stand a chance. As a secret agent captured in enemy territory, she's living a spy's worst nightmare. Her Nazi interrogators give her a simple choice: reveal her mission or face a grisly execution. As she intricately weaves her confession, Verity uncovers her past, how she became friends with the pilot Maddie, and why she left Maddie in the wrecked fuselage of their plane. On each new scrap of paper, Verity battles for her life, confronting her views on courage, failure and her desperate hope to make it home. But will trading her secrets be enough to save her from the enemy? A Michael L. Printz Award Honor book that was called "a fiendishly-plotted mind game of a novel" in The New York Times, Code Name Verity is a visceral read of danger, resolve, and survival that shows just how far true friends will go to save each other.

I'd heard lots of good things about this book going into it so I was intrigued and excited to read it. It didn't disappoint me. It was a definite page turner. I don't want to give anything away about this book because I think it's one you really have to go into not knowing what's going to happen to truly enjoy it. Therefore I'll probably be a little cryptic in this review. The friendship in the story is beautiful, inspiring and fun. The realness of the danger is brutal and honest but the book gives you enough humor and fun moments to get you through it. I really loved all of the books references to classic literature such as Swallows and Amazons and Peter Pan. My main qualm with it is the language. There's some strong language every once and a while, which is why I won't be handing it to my little sister until I'm able to go through it with whiteout. Also it's fairly gritty... torture and all so don't hand it to younger kids for that reason either. Besides that though it is a really enjoyable and fast paced read. I don't really read much YA so it was nice to experience one that I enjoyed.
Okay so minor spoiler so shield your eyes but quick question... does anyone else think Jamie and Maddie got together in the end? I know there's a sequel, which hopefully I'll get to soon, but I'm musing on this right now. End spoiler.
All in all I recommend this book with the qualm mentioned above. :)
P.S. Be sure to check out my five year blogiversary giveaway HERE!