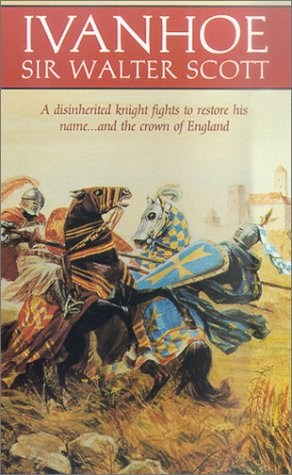 For the re-reading challenge, literary movement challenge, alphabet soup challenge and mount TBR challenge I re-read Sir Walter Scott's novel Ivanhoe. I wanted to re-read it because the first time I read it I didn't care for it much. However, this re-read has changed my mind and I am a fan! It went from a three star to a five star on Goodreads! The back of the copy I have says that Ivanhoe was the original historical novel, which I had not known and I thought super interesting!


Synopsis from Goodreads: Set at the time of the Norman Conquest, this novel discusses Ivanhoe's return from the Crusades to claim his inheritance and the love of Rowena and his involvement in the struggle between Richard Coeur de Lion and his Norman brother John. It is structured by a series of conflicts: Saxon versus Norman, Christian versus Jew, and men versus women.

I grew up watching the 1982 film version with Anthony Andrews (best loved for his performance in The Scarlet Pimpernel made in the same year). When reading the book this time, I was amazed at how closely the film version had stuck to it and actually because I had the mental picture of the film in my head I was really able to see the book come alive for me. All of the characters are very real to me: Ivanhoe's chivalry, Rebecca's devotion, Brian de Bois-Guilbert's evil and lustful heart and so many more! It was interesting to see the dynamic of the Jews vs. Christians play out and see Ivanhoe's attitude change from mild disgust to deep respect for Rebecca.
The big bad three- Brian de Bois-Guilbert, Font-de-Bouef and de Bracy are so creepily bad, though when it comes down to it I prefer de Bracy... he has traces of honor. There was a part in the book, I think after Font-de-Bouef had been fatally injured, where Brain de Bois-Guilbert and de Bracy were arguing over who was the better Christian and I was just dumbfounded by their ridiculous arguments and their blindness to their sins!
And the action! I love a good joust! ;) It was exciting to read the jousts, sword fights and the storming of the castle in the book. Sir Walter Scott did a good job bringing them to life.
Oh and one of my favorite parts of the book is that it includes my old favorite Robin Hood and his merry men! King Richard and Friar Tuck's songs together are actually quite hilarious! Oh yeah, and King Richard is in it too and he's awesome. ;)
This books definitely fits in the Romanticism literary movement. You have the young love of Ivanhoe and the fair lady Rowena, the romantic tension of Ivanhoe and Rebecca, and the romantic tension between Rebecca and Brian de Bois-Guilbert. Obviously quite a lot of romantic tension, which I'm not normally a fan of but thankfully Sir Walter Scott is not a 21st century writer so it worked. ;)
Overall a great book and I would highly recommend it!