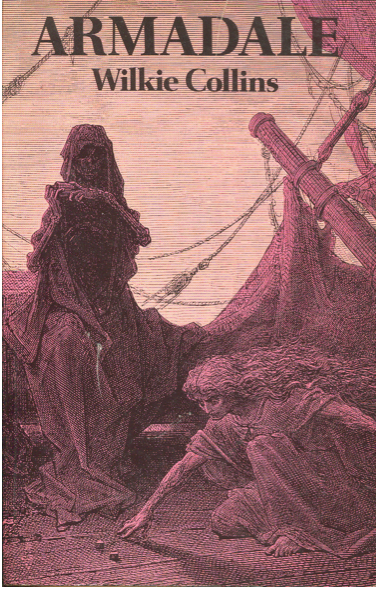 Synopsis from Goodreads: The novel has a convoluted plot about two distant cousins both named Allan Armadale. The father of one had murdered the father of the other (the two fathers are also named Allan Armadale). The story starts with a deathbed confession by the murderer in the form of a letter to be given to his baby son when he grows up. Many years are skipped over. The son, mistreated at home, runs away from his mother and stepfather, and takes up a wandering life under the assumed name of Ozias Midwinter.

This book is loaded with mystery, intrigue and murder! It kept me guessing the whole time wondering what was going to happen and most interestingly it really left me uncertain on who to root for. My poor family had to hear my expositions on this book quite a lot and oftentimes could not get me to put it down. I could frequently be heard exclaiming "I just want to know how it's all going to turn out!" It was one of those books where I saw the possibility of it ending with the "bad guys" winning but I won't tell you if they did or not!
The two Allan Armadales- I'll just call one Allan and the other one by his alias Ozias Midwinter to eliminate confusion- both had their issues in their own way. Allan was a total airhead, entirely naive and just really annoying sometimes. However, Allan was kind and considerate of others. Ozias Midwinter was a lot more discerning having been mistreated by the world since he was young. He does become blindsided and fall for the villianess but he learns in the end. I personally liked Ozias the best of all the characters in the book. I felt his struggle on whether to stay with Allan and be his friend or to leave him, worried as he was by circumstances (if you want to want the circumstances are you'll just have to read the book!). I felt that Ozias had a lot of weight on his shoulders throughout the book. In the end, I appreciate that he was able to look at the dream (okay I'm giving you one of the circumstances!) and see it's true purpose.
Miss Milroy was also quite the interesting character. She is a love interest of Allan. I'm not really quite sure what to think of her. She can be somewhat manipulative but not in a hard hearted way I don't think. However, I wonder if potentially down the road it could lead to it? Miss Gwilt's opinion of her is as an artful woman but then Miss Gwilt isn't very fond of Miss Milroy.
Now for Miss Lydia Gwilt. What a villianess! So warped, so heartlessly evil and yet we pity her so much and root for her to have a change of heart throughout the book, always wondering if possibly she could. Does she? Read the book and find out!
Seriously, I could not figure out how this book would conclude right up to the end!
This book was kind of long and in a few places I felt it drag but for the most part it kept me entertained throughout. I'm a fast reader and I tend to start skimming if it starts dragging so therefore I don't notice slow paces quite as much.
All in all I recommend the book highly! :)