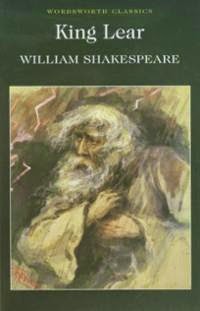 For the Alphabet Soup Challenge, the audiobook challenge and every TBR pile challenge I've signed up or ;) I read William Shakespeare's play King Lear. I was incredibly unfamiliar with this play so I was horribly lost listening to it. After listening to each act I read the Sparknotes on it to make sure I understood what happened in it. Thankfully, I was able to keep it fairly straight in my head with that.


Synopsis from Goodreads: One of Shakespeare's finest tragedies, the work displays a pessimism and nihilism that make it a 20th-century favorite. The aging King Lear decides to divide his kingdom among his three daughters, allotting each a portion in proportion to the eloquence of her declaration of love. The hypocritical Goneril and Regan make grand pronouncements and are rewarded; Cordelia, the youngest daughter, who truly loves Lear, refuses to make an insincere speech to prove her love and is disinherited. The two older sisters mock Lear and renege on their promise to support him. Cast out, the king slips into madness and wanders about accompanied by his faithful Fool. He is aided by the Earl of Kent, who, though banished from the kingdom for having supported Cordelia, has remained in Britain disguised as a peasant.

Despite my unfamiliarity with this play, I did like it. I was telling my little sister about it and she said she'd though she'd heard a fairy tale like it before so I think the basic plot is probably an old and famous one. Since she mentioned that, I have recalled hazily that I read that fairly tale too. The intrigue in this story is higher I think than in most of Shakespeare's plays. The daughters... Goneril and Regan that is... made me mad! I felt sorry for Lear but felt he kind of deserved what he got for being so blinded and heartless.... kind of.  You can see his repentance throughout the play. Poor Cordelia is horribly mistreated but stays true to her father throughout and it is for her I feel the most sorry for her in the end.
The side story with the Duke of Gloucestershire and his sons was interesting. The Duke rather got his recompense for being such a jerk to his illegitimate son but again.... not really... I still feel sorry for him! Edmund manipulated all over the place just to get back at his father and his legitimately born brother. Edgar seemed like a decent guy and he cares for his father throughout it all.
Overall, an intriguing play. I would really like to watch a film version to see how it plays out on screen. It looks like there is a newer one with Ian Mckellan and then an older one with Lawrence Olivier so they're probably both pretty great. While not my favorite of Shakespeare's tragedy's, it was quite good!