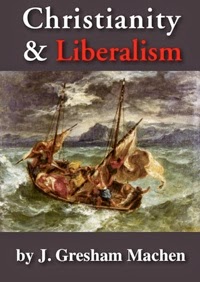 For my Clouds of Witnesses reading challenge and my Non-fiction reading challenge I read J. Gresham Machem's book Christianity and Liberalism. This was an absolutely excellent book, so deep that I could probably re-read it tomorrow and find plenty that I missed.


Here's the synopsis from Goodreads: Machen's classic defense of orthodox Christianity establishes the importance of scripural doctrine and contrasts the teachings of liberalism and orthodoxy on God and man, the Bbible, Christ, salvation, and the church. Though originally published nearly seventy years ago, the book maintains its relevance today.

Machen lays out the liberal turn that modern Christianity has taken (even more obvious now than it was then) and looks at what scripture has to say about the changes that are being made by these liberal modern Christians. I will always appreciate someone who turns to scripture about these issues and looks deeply into them. He expressed many things that I have ranted about before... public schools, government, ect. as well as other issues. He speaks to how modern Christianity has become more allowing of certain sins in an effort to appear tolerant. He starts, with the basics though. Defining God, the church and our faith. There is so much more he goes into so I would highly recommend you read it instead of relying on my memory. ;) This book is definitely worthy of many re-reads as I feel there is always something I could be learning from it.