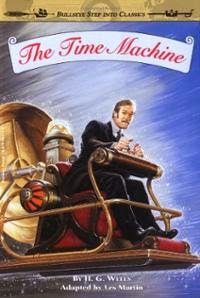 For my last Classics Club spin I read H.G.Wells's The Time Machine. I wasn't totally taken with the last H.G. Wells book I read (War of the Worlds) but as I'm kind of a Doctor Who geek and into the whole time travel thing right now, I was hoping I would enjoy The Time Machine more. To my surprise I did. It didn't totally win me over or anything like that but it was an enjoyable book nonetheless. The Time Machine was not the first story to introduce time travel but it was the one that really introduced it to the general public.


Synopsis from Goodreads: With a speculative leap that still fires the imagination, Wells sends his brave explorer to face a future burdened with our greatest hopes...and our darkest fears. A pull of the Time Machine’s lever propels him to the age of a slowly dying Earth.  There he discovers two bizarre races—the ethereal Eloi and the subterranean Morlocks—who not only symbolize the duality of human nature, but offer a terrifying portrait of the men of tomorrow as well.

One of the interesting things about The Time Machine was that it did not paint a pretty picture of our future but instead showed it regressing. There was still sin in the world... surprise, surprise. ;) I've got to give the hero of the story credit, he is very adventurous... and I'm not just talking about the actual time traveling he does but also about all of the exploring he does in the future and the many risks he takes. He's also quite resourceful, though sometimes a little dull... using up the matches... seriously? Get with it! ;) Though the writing was a little hard to read, it was still interesting and I can realize how ground breaking it would be in its day.
All in all, an okay book and one that you should read just to see one of the first glimpses that was offered into the world of time travel. :)