Book Reviews- The Chronicles of Prydain

One of my very favorite fantasy series growing up. This was a re-read of the series for me. My sister and I actually re-read them at the same time so it was fun to compare notes. Since she had more time to read she got done before I did. :(


The Book of Three 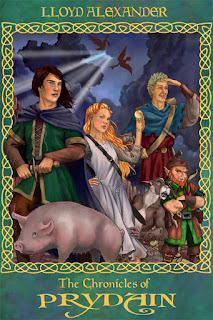 Synopsis from Goodreads: Taran wanted to be a hero, and looking after a pig wasn't exactly heroic, even though Hen Wen was an oracular pig. But the day that Hen Wen vanished, Taran was led into an enchanting and perilous world. With his band of followers, he confronted the Horned King and his terrible Cauldron-Born. These were the forces of evil, and only Hen Wen knew the secret of keeping the kingdom of Prydain safe from them. But who would find her first?

This book felt more immature for me this time... maybe because I'm older? It was still quite enjoyable. Taran as the wannabe hero is so adorable... I think we have all been like him at some point in our lives. And I LOVE Eilowny! :)

Synopsis from Goodreads: Taran, the Assistant Pig-Keeper, and his friends are led into a mortal struggle with Arwn and his deathless warriors. Taran must wrest the black cauldron from them, for it is the cauldron that gives them their evil strength. But can he withstand the three enchantresses, who are determined to turn him and his companions into toads? Taran has not foreseen the awful price he will have to pay in his defence of Prydain.

I wanted to slap Elidyre the whole time I was reading this book! Besides that enjoyable but still feeling slightly immature.


The Castle of Llyr

Synopsis from Goodreads: Princess Eilonwy hates to leave her friend Taran, Assistant Pig-Keeper, and her beloved home, Caer Dallben. Why does she have to go to the Isle of Mona to train as a proper lady when she's already a princess? But Eilonwy soon faces much more than the ordeal of becoming a dignified young maiden, for she possesses magical powers sought by the evil enchantress Queen Achren. When Eilonwy is put under a deep spell, Taran and his companions set out on a dangerous quest to rescue her. Yet how can a lowly Assistant Pig-Keeper hope to stand against the most evil enchantress in all of Prydain?

I feel here the characters start maturing more. Taran deciding to watch after Prince Rhun was a mature decision that he stuck to despite the trials it gave him. I liked seeing Prince Rhun mature through the story too.

Synopsis from Goodreads: Taran is an Assistant Pig-Keeper no longer; her has become a hero. Now he dreams of winning the hand of the Princess Eilonwy. Eager to find his origins, Taran sets off with the faithful Gurgi on a quest across the marvelous land of Prydain. Their journey takes them to the three witches in the Marshes of Morva, through the many realms of Prydain, and finally to the mystical Mirror of Llunet, which may hold a truth about Taran's identity that he cannot bear to face. In the course of his travels, Taran will learn much about his world and the good and bad people in it, but will also discover much about himself. After many hard lessons, Taran learns the secret of the Mirror Llunet and of the past--and finds not an ending but a beginning.

I'll admit that growing up this was my least favorite but my brother always said it was his favorite. Now this time around reading it I see why. Taran has developed into a man and also has realized that he has developed feelings for Eilowny. He matures so much in this book and I love it! I always felt Taran was a little too childish for me but in this one, and of course as I previously mentioned in the Castle of Llyr he starts to act like a man and not like a boy. The only downside to this one is that Eilowny isn't in it!

Synopsis from Goodreads: When the sword of Dyrnwyn, the most powerful weapon inthe kingdom of Prydain, falls into the hands of Arawn-Death-Lord, Taran, Assistant Pig-Keeper, and Prince Gwydion raise an army to march against Arawn's terrible cohorts. After a winter expedition filled with danger, Taran's army arrives at Mount Dragon, Arawn's stronghold. There, in a thrilling confrontation with Arawn and the evil enchantress Achren, Taran is forced to make the most crucial decision of his life.

The final novel in the series and the one to win the Newberry award! This is probably the best! Everyone is grown up and the stakes are higher than ever. This is also the saddest. Characters are dying left and right, reminding us in a way that are characters are no longer children and they are facing the harsh realities of life. Naturally Taran and Eilowny get married and live happily after. :)