For the Classics Club I read John Steinbeck's novel East of Eden. 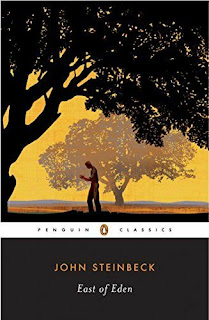 Synopsis from Goodreads- Set in the rich farmland of California’s Salinas Valley, this sprawling and often brutal novel follows the intertwined destinies of two families—the Trasks and the Hamiltons—whose generations helplessly reenact the fall of Adam and Eve and the poisonous rivalry of Cain and Abel. Adam Trask came to California from the East to farm and raise his family on the new rich land. But the birth of his twins, Cal and Aaron, brings his wife to the brink of madness, and Adam is left alone to raise his boys to manhood. One boy thrives nurtured by the love of all those around him; the other grows up in loneliness enveloped by a mysterious darkness.

I have been very bad about getting to my classics club list recently but East of Eden was actually one of the books chosen for my book club so I was glad for the nudge to get this book knocked off the list.
East of Eden was one of those complicated books that didn't really have any great characters. There were a couple minor characters like Lee that were good but most of the characters had personal failings to some degree or another that made it hard to like them. Some obviously had major moral failings (Cathy!) too. Let's talk about Cathy. Wow! I'm not sure I've ever been so revolted by a character in literature! She is so morally reprehensible even as a child without any obvious excuse even... not there is any excuse for her behavior... that it is impossible not to be disgusted by her. I found myself reading it just waiting to see what next horrible thing she was going to do.... and she could always top herself! In the end, I felt disappointed in her outcome... I felt she deserved more recompense for her horrible life... though I know her ultimate punishment was to come after her death.
As for the other characters... I found Adam to be so weak of a character, though I pity him. His sons were intriguing overall... I would have liked to see more of them actually to get a better idea of them.
Samuel Hamilton and his whole family for the most part are likable and definitely interesting to follow but overall don't have as much drama as the Trasks so take a back burner in the book.
Overall there's just so much to pick through in the book. It spans three generations making for an interesting read. I didn't love it, but I didn't hate it. I'm glad I read it and unlike some books of this nature I could see myself reading it again in the future as I think there's a lot to be gleaned from it.