For the Period Drama Challenge I'm reviewing the 1979 miniseries adaptation of Rebecca. 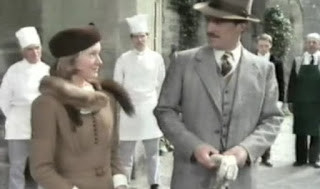 Synopsis from IMDB: A young English girl in Monte Carlo falls in love with a rude, handsome stranger who proposes to her and rescues her from the drudgery of being a hired companion. But when he takes her to his country estate, Manderly, all her confidence disappears, especially in the face of Maxim's dour and mysterious housekeeper, Mrs. Danvers, and as odd rumors reach her, the second Mrs. de Winter decides to find out everything she can about her predecessor, Rebecca.

First off, thank you Hamlette for turning me on to this adaptation! I'd seen the 1940 version with Laurence Olivier and Joan Fontaine before and enjoyed it but I was intrigued to watch an adaptation that was more accurate to the book. While I still prefer how the 1940 version slightly changes the ending making it slightly more moral I do think overall the 1979 miniseries got more right. And no, I shouldn't compare but I am. ;) A miniseries just gives you so much more screen time to tell the story!

I loved the casting. First we have Jeremy Brett (of Sherlock Holmes fame and he also played Freddy Eynsford-Hill in My Fair Lady when he was quite a bit younger) playing our mysterious Mr. Maxim de Winter. Brett does a great job of portraying Mr. de Winter, very reminiscent of Olivier's portrayal I thought. Then we have Joanna David (plays Mrs. Gardiner in the 1995 adaptation of Pride and Prejudice and she's also played several other random parts in random period dramas that I haven't seen yet, most notably Elinor Dashwood in an old version of Sense and Sensibility) playing the second Mrs. de Winter (the character is never given a name so that's as good as you get!). I really liked Joanna David in this part. She's sweet, youthful, innocent. Simply perfect for the role. Anna Massey (Mrs. Norris in the 1983 version of Mansfield Park and Miss Prism in the 2003 adaptation of The Importance of Being Ernest) plays the sinister Mrs. Danvers. She does a great job creeping me out so yes, good job with the part. I also just noticed when typing out her name that she's a "Mrs.". Who in their right mind married her?!?!??!?!?! Just random weird observation that I should have noticed years ago. The other more minor characters are brilliant portrayed as well. The actor who played Rebecca's cousin Jack Flavell had the creepy weird laugh down perfectly. Ugh! I also liked that the minor characters, like Frank Crawley for example who is one of my favorite characters, get more screen time.

As far as the screenplay goes I thought it was great. It was very accurate to the book but it didn't feel stilted like the actors were just quoting from the book.

Now when it comes watching it the sad truth is you have to watch it on YouTube because it was never released to DVD I guess and the quality is not so great at all.

As far as costumes go they're pretty plain but that fits with the story. The prettiest one you get is the dress that the second Mrs. de Winter tires to wear to the costume ball. The music isn't that spectacular either.

I'd say the film is family friendly but SPOILERS it does deal with an unfaithful wife, which is discussed but would probably go over young viewers heads. I know that when watching the 1940 version as a kid it did. END SPOILERS. So family friendly overall. :) 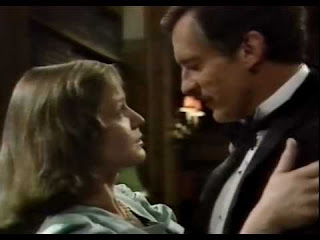 Overall I really enjoyed this. Interestingly enough I saw that this one is rated slightly higher on IMDB than the 1940 adaption (which I think is considered the definitive version). I'm not sure if I have a favorite of the two though. I like them both equally and to be honest I haven't seen the 1940 version in a while. Watch or not? I say watch! :)