I'm getting down to the end of Dickens' novels! Just a couple more left to go! I almost own all of them now too!
For the Read England challenge, Author A-Z challenge, Mount TBR challenge, Victorian Bingo challenge and the Classics Club I read Charles Dickens' novel Barnaby Rudge. 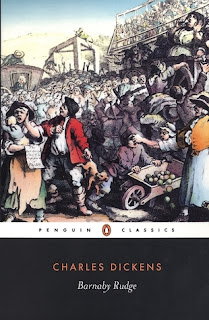 This is one of Dickens' less read and less known novels but I thought it was still an excellent book and through it I learned about a subject of history I knew nothing about. That's why I love historical novels. :)


Synopsis from Goodreads: Set against the backdrop of the Gordon Riots of 1780, Barnaby Rudge is a story of mystery and suspense which begins with an unsolved double murder and goes on to involve conspiracy, blackmail, abduction and retribution. Through the course of the novel fathers and sons become opposed, apprentices plot against their masters and Protestants clash with Catholics on the streets. And, as London erupts into riot, Barnaby Rudge himself struggles to escape the curse of his own past. With its dramatic descriptions of public violence and private horror, its strange secrets and ghostly doublings, Barnaby Rudge is a powerful, disturbing blend of historical realism and Gothic melodrama.

Easily the most despicable character in the book was Sir John closely followed by Hugh. They manipulated people and simpered through life. Thanks to Hugh, poor Barnaby almost died! Oops... SPOILERS!!!! I had to let it out though. ;)
I liked Joe a lot but his Dad was such an idiot he drove me crazy! I felt like Joe tried hard to respect his father and still be a dutiful son but in the end I completely sympathize with him leaving. I like that Dolly and him didn't marry until they were older and Dolly had really wised up and become more mature.
Overall a great book! If you haven't read it I know these ramblings didn't make sense but that just goes to show you should read it! ;)