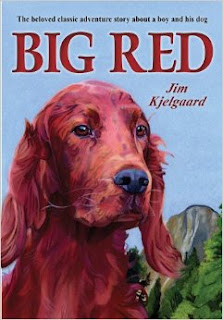 Synopsis from Goodreads: From the moment Danny sees the beautiful Irish setter, he knows Red is the dog for him.  Fast and smart, strong and noble, Red is the only dog Danny wants by his side.  Soon, neither boy nor dog can stand to be apart.  Together Danny and Red face many dangers in the harsh Wintapi wilderness that they call home.  But the greatest test of their courage and friendship will come from an enemy more cunning than any they've known before--a bear who is the undisputed king of the wilderness, a savage killer called Old Majesty.

This is a classic boy and dog story. It made me want an Irish settler really badly!
I also thought it was a good father and son story. Also there was the father figure of Mr. Haggin, Red's owner, who looked after Red and Danny. Both men look after Danny but in a lot of way he looks after himself. He's mature, kind and determined. Characteristic a lot of men nowadays could learn from.
Overall a great boy and dog story with some exemplary characters and of course a good bear hunt. :)
Recommended!