Synopsis from Wikipedia: Professor of phonetics Henry Higgins makes a bet that he can train a bedraggled Cockney flower girl, Eliza Doolittle, to pass for a duchess at an ambassador's garden party by teaching her to assume a veneer of gentility, the most important element of which, he believes, is impeccable speech. The play is a sharp lampoon of the rigid British class system of the day and a commentary on women's independence. 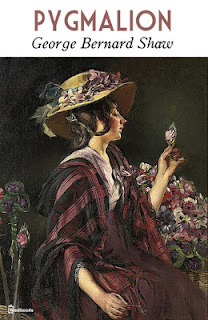 I grew up watching My Fair Lady, the musical adaptation of Pygmalion so I was pretty familiar with the story. I've also seen a black and white film version with Leslie Howard as Henry Higgins that I recall being pretty good. It's actually incredible how close the two are. There were several direct quotes in the film even in the music! One thing I noted that Henry Higgins was (if this is possible) meaner to Eliza than he is in My Fair Lady. Now let me say here I actually find Henry Higgins absolutely hilarious and I love him but I think in real life he would drive me crazy! He treats Eliza like she is a hobby, a pastime, an amusement. Colonel Pickering does that somewhat as well but not as badly as Higgins. I just feel that while they do that in the movie, it's much more obvious in the book.
There's a strong statement in there for Eliza's independence, which is actually well done I think. The Monthly Motif theme for this month is a character who stands up for something they believe in and I think Eliza really stands up for herself in this story.
At the end, she actually ends up marrying Freddy! That disappointed me! I'm not sure she should marry Henry Higgins but I don't think she should marry Freddy! However, from what it tells of their marriage I do think it turned out well and they learned from each other.