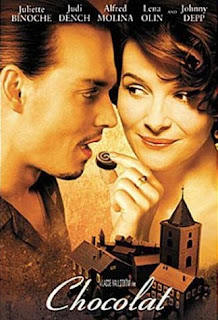 My mom has always talked about how much she enjoys the movie Chocolat so finally we watched it together and then I realized it was basically a period drama film so I thought hey, I'll review it for the Period Drama Film challenge. Cause why not? ;)


Synopsis from IMDB: Vianne Rocher and her young daughter are drifters who are met with skepticism and resistance when they move to a conservative town in rural France and open a chocolate shop during Lent. As Vianne begins to work her magic and help those around her, the townspeople are soon won-over by her exuberance and her delicious chocolates - except for the mayor, who is determined to shut her down. When a group of river drifters visit the town, Vianne teaches the townspeople something about acceptance, and finds love for herself along the way.

This was a fun and sweet little film. It had it's issues but overall it was delightful.
First off it's about chocolate. Yum! And not just any chocolate. Super delicious decadent looking chocolate that I want to pull from the screen and eat! It's an awful movie to watch when there isn't any chocolate around to eat!

Vianne Rocher (Juliette Binoche)- Vianne is kind of a complicated character. With her daughter she moves from town to town. As the story develops you discover why she does this.... it is a tradition passed on from her mother to spread the love of chocolate with everyone. As the story goes on though she begins to realize how hard it is on her daughter to keep up with the constant moving and constantly having to make new friends. Vianne is also non-catholic.... non-christian altogether, which condemns her to all of the townspeople, especially the mayor.  Now I'm not a catholic so their arguments about lent that end up happening I really could care less who wins them. However, I'm more disappointed in Vianne's atheism that comes out, which develops some themes I wasn't too big a fan of. 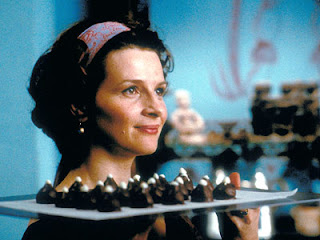 Comte de Reynaud (Alfred Molina)- Another complicated character. Comte de Reynaud is the mayor of the town and very much so rules it with an iron fist, though he does care deeply for it. At the beginning of the story you hear him tell people that this wife is in Rome and has decided to extend her stay there but as the story goes on you realize that while she is in Rome she isn't coming back. This fuels a lot of his anger. 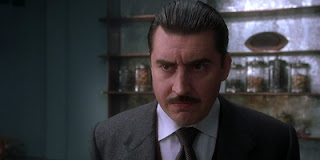 Josephine Muscat (Lena Olin)- At the beginning Josephine comes off as rather odd. You discover she's somewhat of a kleptomaniac and that her husband is emotionally and pushily abusive to her. With Vianne's support, Josephine leaves her husband and starts a new life. I really loved seeing Josephine's character grow through the film. She becomes a whole new person. 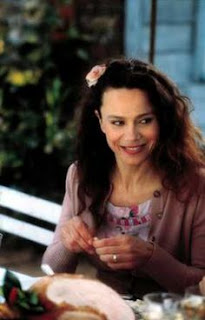 Roux (Johnny Depp)- Roux is a water gypsy who camps out by the town about halfway through the film. Like Vianne he is considered an outcast by the town. A relationship develops between the two. It was weird to see Johnny Depp in this film not looking weird. I've only ever seen him as Captain Jack in Pirates of the Caribbean. 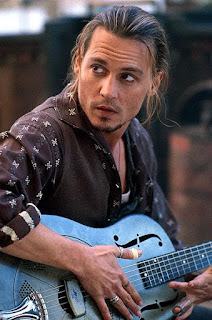 Armande Voizin (Judi Dench)- Armande rents the shop to Vianne and soon frequents it as well and you begin to learn about her life. She's estranged from her daughter and therefore her grandson. During the film though Vianne brings her grandson and then eventually her daughter into reconciliation with Armande. 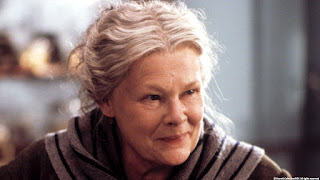 The music was a lot of fun in this film. Especially the gypsy tunes played.

I adored the costumes in this film! Vianne's wardrobe was classic and beautiful. 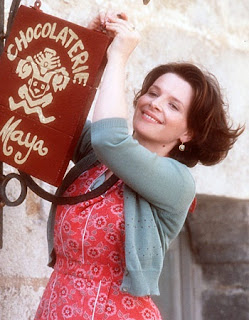 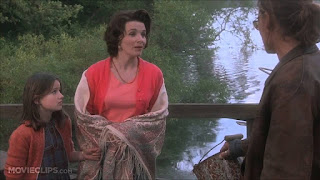 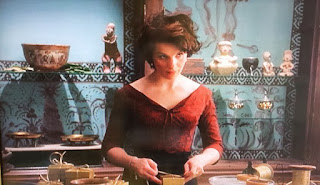 Vianne's daughter was born out of wedlock and we do not know who the father was. Vianne wear some lower cut clothes. There's two inappropriate scenes, both of which we dimmed the screen for so I'm not sure quite how much they showed. I don't think they showed too much though but still unnecessary.

Overall I enjoyed this film a lot but it definitely had some issues with immorality. The conclusion was somehow not quite satisfying because in the end everyone seemed to abandon their catholic faith. As I said I'm not catholic so some of that was a little ridiculous to me as I don't believe in lent but still the basic morality of Christianity was there and it seemed like it lost. I think maybe more the point of it was that the townspeople, and especially the mayor, needed to loosen up with their legalism. I think they loosened up a little too much though.
Have you seen Chocolat? What did you think of it?