For the Classics Club I read Leo Tolstoy's novel War and Peace. 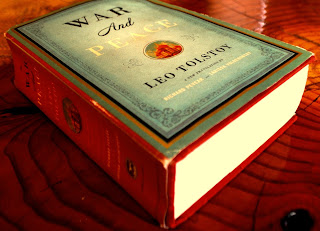 Synopsis from Goodreads: War and Peace broadly focuses on Napoleon’s invasion of Russia in 1812 and follows three of the most well-known characters in literature: Pierre Bezukhov, the illegitimate son of a count who is fighting for his inheritance and yearning for spiritual fulfillment; Prince Andrew Bolkonsky, who leaves his family behind to fight in the war against Napoleon; and Natasha Rostov, the beautiful young daughter of a nobleman who intrigues both men. As Napoleon’s army invades, Tolstoy brilliantly follows characters from diverse backgrounds—peasants and nobility, civilians and soldiers—as they struggle with the problems unique to their era, their history, and their culture. And as the novel progresses, these characters transcend their specificity, becoming some of the most moving—and human—figures in world literature.

How do you even begin to review a novel like War and Peace?!?! One of the longest books in literature and widely considered one of the most daunting, it seems like no easy task to "just put down a few thoughts". There's so much going on in the story so many different little plot points. There's a handful of main characters that the story focuses on and you come to love, pity and sometimes hate them. My personal favorites were Pierre and Natasha. There were no perfect characters. Everyone had flaws.  Each character was so human. War and Peace is a story about life. It covers, war, family, love and death. This book covers years and the characters grow up and mature in front of your eyes. The backdrop is the napoleonic wars, which overshadow the book. Sometimes Tolstoy took a break from the story to just talk about the war.... something I often found tedious but I probably overreacted to it because I just wanted to find out what happened to the characters.
I really don't know what else to say about it that hasn't already been said. I found it beautifully compelling and it definitely makes me want to read more Russian literature.
I'd also like to give a plug for the app Serial App. It has lots of books on it (mostly classics I think) and it gives you a "serial" of a book every day. It helps with reading really long books like War and Peace.
I'd really like to a film version of this now to see how it translates to screen. I'm thinking of checking out the Audrey Hepburn version and the Lily James version. Any recommendations?
Overall I'm so glad I finally read War and Peace. I would definitely recommend it if you're interested in Russian literature!