A couple years ago I read William Thackeray's novel Vanity Fair. I always meant to watch a film version of it but it's obviously taken me a little while to get around to it.
So (finally) for the Period Drama Challenge I watched the 1998 miniseries of Vanity Fair.
Spoilers follow. 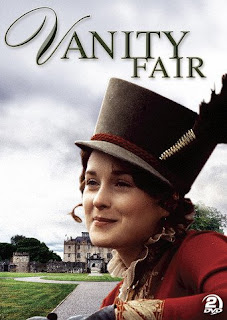 Summary: School friends Becky and Amelia leave school together, Amelia for home and Becky for a quick visit with her friend before leaving for a life as a governess. The sweet Amelia becomes engaged to her childhood sweetheart George Osborne. The mercenary and beautiful Becky immediately sets about trying to seduce Amelia's gullible and indolent brother Joss but ends up failing in that endeavor due to George's interference, as he sees through her. Becky sets off to her first governess position and there tries to seduce first her employer and then both of her employers sons. She captures Rawdon Crawley's heart and they marry much to the disapproval of his rich aunt who disowns him. Meanwhile Amelia's father goes bankrupt and therefore George's father forbids him to marry Amelia. George's friend William Dobbin though convinces him to go through with the marriage though as he knows it will break Amelia's heart if he doesn't. George and Amelia marry and soon after head out with the militia as well as Rawdon and Becky. At the military base Becky shamelessly flirts with George Osborne to get back at him for dissuading Joss from marrying her. George is already wearying of his marriage and returns Becky's flirtation, even inviting her to run away with him. The battle of Waterloo interrupts the flirtation though and Dobbin, George and Rawdon must all go to battle. George dies in battle, leaving Amelia brokenhearted and pregnant. Several years later Amelia and her son are living with her destitute parents, secretly supported by Dobbin. Becky also had a son and with Rawdon they are living in a fashion far above what they can afford in order to climb the social ladder. Becky's methods of climbing though are far from moral and Rawdon finds her with Lord Sedley. Rawdon, who until then had always thought Becky faithful to him, though of course she had her little flirtations, realizes this is not so and they separate. Dobbin finally confesses his love to Amelia who cannot see past her love for her first husband so refuses him. Two years later Dobbin, Joss, Amelia and Amelia's son are touring in Germany and run into Becky, who has fallen in life, drinking and gambling. She once agains tries to seduce the gullible Joss who then encourages Amelia to welcome back her old friend. The ever affectionate Amelia does, much to Dobbin's chagrin who reminds Amelia how Becky once flirted with George. Amelia cannot bare to hear her revered husband so spoken of and throws George away. George leaves, concluding that he could never get Amelia to love him as she is wrapped up in the memory of her first husband. Becky though, in a turn of kindness, shows Amelia the note that George gave her so many years before asking her to run away with him. Amelia realizes that she has rejected the better man for a memory of someone she wished was better. She goes after George and they marry.

As far as the book to movie adaptation goes it was pretty close. When you have 300 minutes though you can get quite a bit in. :)

Becky Sharp Crawley (Natasha Little)- She's like a mixture of Cynthia Kirkpatrick (Wives and Daughters) and Scarlett O'Hara (Gone With the Wind) on steroids of evil! She has no morals and no real feelings. She's in it for the money and power and she'll do anything for those. She's called an anti-hero but I think that's pushing it. I think the actress did a great job portraying her. She had not qualms about portraying the utterly immoral and heartless Becky Sharp portrayed in the book. I don't like Cynthia and I really don't like Scarlett and when you combine those on the aforementioned evil steroids you get someone I really despise. Becky Sharp is one of my least favorite characters in literature. 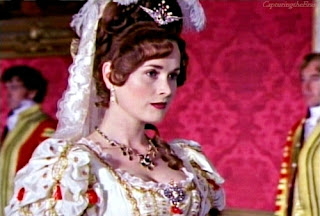 Amelia Sedley Osborne (Frances Grey)- Amelia is kind of like Melanie Wilkes from Gone With the Wind. I know I'm drawing a lot of Gone With the Wind comparisons.... sorry! She's sweet and kind and wouldn't think badly of anyone. Melanie I can tolerate pretty well and really I came to love her. Amelia just drives me nuts! She's obsessed with her idealized image of her dead husband and she can't see past that. Because of that, she never gives Dobbin a chance until Becky does the one nice(ish) thing and burst Amelia's bubble about her husband. 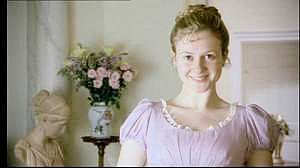 William Dobbin (Phillip Glenister)- The one character I like. He's so kind and self-sacrificing. He sticks by Amelia throughout it all, supporting her after her husband dies. He even helps to get her and George together even though he loves Amelia himself. He knows that Amelia will only be happy with George so he makes that sacrifice. If he hadn't ended up with Amelia after everything though I would have been so mad! 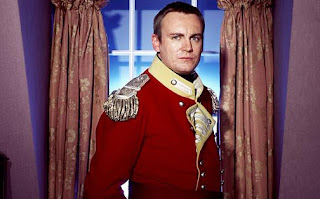 Rawdon Crawley (Nathaniel Parker)- You might recognize this actor from playing Harold Skimpole in Bleak House or as Arthur's uncle in The Adventures of Merlin. Rawdon is a lot like Becky in his mercenary endeavors. He is innocent though of the depths that Becky will go to. He seems to have a stricter moral compass than Becky when he is horrified by her affair with Lord Sedley and splits with her. 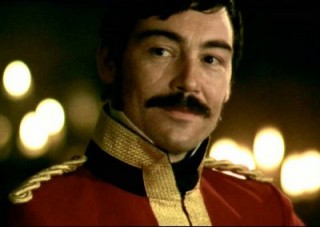 George Osborne (Tom Ward)- You might recognize this actor from playing Colonel Fitzwilliam in Death Comes to Pemberly. George is kind of complicated. He was raised in comfort to be selfish, vain and self-bosessed. He does some things right but overall he just messes up majorly. He fights back against his father to go through with marrying Amelia but some of that was by Dobbin's pushing and prodding. In the end though he would have betrayed Amelia for Becky. 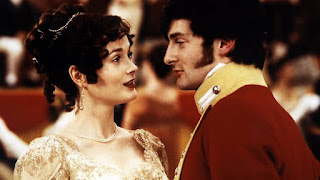 Other actors that I personally recognized are Anton Lesser (Mr. Merdle in Little Dorrit), Sylvestera Le Touzel (Fanny Price in Mansfield Park), David Bradley (Filch in Harry Potter, Solomon in one episode of Doctor Who, Rogue Ridherhood in Our Mutual Friend and much more!), and Miriam Margolyes (Professor Sprout in Harry Potter).

Not too much nature scenery is seen but the shots of the elegant London houses are beautiful.

One of the few period dramas where I'm not crazy about the music. There were a lot of weird trumpets.

I loved the costumes in this film! For the most part I preferred Becky's outfits to Amelia's. Becky's did tend to be more immodest though, which fit her character, but obviously I didn't prefer that part of her outfits. It is nigh next to impossible though to find pictures of this miniseries though so if you want to see the lovely outfits beyond what I've posted in the above pictures (which were hard enough to track down) you'll have to watch it.

The story involves a woman who uses her sex appeal left and right with heavy flirting. This might go over young viewers heads as 90% of it is implicit and not explicit. As far as things being shown for the most part nothing is, which is surprising for the content matter. When Rawdon finds Becky and Lord Sedley together they are both fully clothed lying on a couch together but the implications are there. There are some low cut dress, mostly on Becky. George also tells Joss that Becky wasn't the kind of girl you had to marry "if you know what I mean". Besides those though it stays pretty clean. I felt comfortable watching it with my little sister and I never felt like I needed to fast forward or dim my screen. Everyone's standards are different though so before showing it to younger children I always encourage you preview the film first.

Overall I though it was a good adaptation. Vanity Fair is not one of my favorite books but it is very interesting and for the most part enjoyable and I found this miniseries the same.