I'm participating in Olf Fashioned Charm's 2016 Period Drama Film Challenge. One of the first films Laurie herself reviewed was the 2015 version of Far From the Madding Crowd. I'd already been wanting to watch it since it has Carey Mulligan in it but had held off because I wasn't sure how appropriate it was. After reading her review though I felt comfortable watching it and I was able to enjoy it with my mother this past weekend. 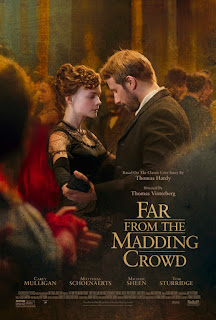 Synopsis from IMDB: The story of independent, beautiful and headstrong Bathsheba Everdene (Carey Mulligan), who attracts three very different suitors: Gabriel Oak (Matthias Schoenaerts), a sheep farmer, captivated by her fetching willfulness; Frank Troy (Tom Sturridge), a handsome and reckless Sergeant; and William Boldwood (Michael Sheen), a prosperous and mature bachelor. This timeless story of Bathsheba's choices and passions explores the nature of relationships and love - as well as the human ability to overcome hardships through resilience and perseverance.

I'm going to preface this review by saying it's been a little while since I've read the book so I'm not 100% sure on how accurate this movie is. All that to say, as far as I recall it was pretty accurate. Since it was a movie and not a miniseries it wasn't as complete of an adaptation and at times it felt a little rushed but for the time frame (approximately two hours) that it had I thought it was well executed. Watching the movie definitely made me want to re-read the book though!
Now on to the rest!

Bathsheba Everdene (Carey Mulligan)- I have loved Carey Mulligan in the roles I've seen her in and she did not disappoint this time either. She's gorgeous, she's got spirit and she is old enough to show the more mature side of Bathsheba but youthful enough looking to show her immature and impetuous side. She brought Bathsheba to life for me. 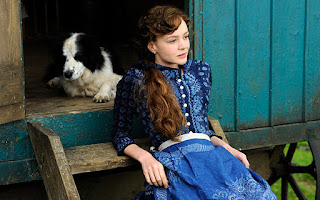 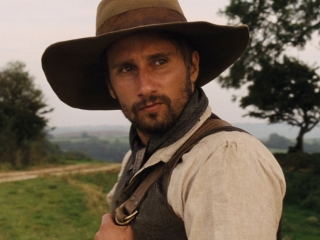 Frank Troy (Tom Sturridge)- Good but nothing spectacular. He does a good job of showing that he does seem to actually care for Fanny but he also shows his absolutely selfish and sensual nature. 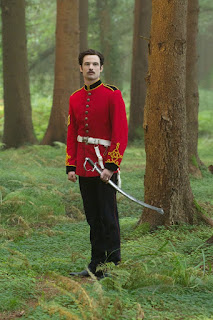 William Boldwood (Michael Sheen)- Good job here! He doesn't act too old or too young. He plays a tortured man to perfection and I truly felt sorry for him. 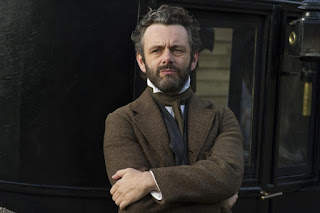 This is more a critique of the book plot than the movie plot as this is a book based movie. I was so frustrated with Bathsheba throughout the movie. She's so immature and she thinks she knows what she is doing the whole time and she keeps messing up! I mean how immature is it to send poor Mr. Boldwood that Valentine? She kind of ruins his life. However Bathsheba does have a lot of gumption and she is always willing to do everything her workers do, which I admire about her. She is kind but she is horrible at giving a straight answer to men! I love that the whole time, with no expectations after being turned down, Gabriel Oak is always there standing by her, giving her advice and seeing her through her mistakes. Throughout the film I felt like Bathsheba needed a father to keep her in line and in a way Gabriel was like a father for her in how he looked after her.... But actually let's ditch that image because hello they get married! The romantic tension is heavy in this film and probably more so than is necessary and was in the book. Bathsheba and Gabriel so obviously belonged together! It's amazing to me that here Bathsheba was basically handed on a platter a choice of three men and out of all of them she chose the absolute worst. Something my mother pointed out when we watched this was that Sergeant Troy was proud and unwilling to wait for Fanny but Gabriele was the exact opposite and he constantly had to humble himself and was always waiting. The difference between a hero and a villain ladies and gentlemen! It think at the beginning Bathsheba wasn't ready for Gabriel. She needed humbling; there was so much she needed to learn. I love their journey together and while it is kind of sappy this may just be one of my favorite literary romances which may or may have not been mostly exponentiated by this movie. ;)

The scenery in this film was absolutely gorgeous! It was filmed in England on the beautiful countryside. It was all absolutely beautiful!

I adored the costumes in this film! I'm not sure how accurate they were too the time period (Laurie spoke more to that in her review) but they didn't appear too far off at least. My one qualm with the costuming was that Bathsheba wore pants when riding her horse. Ummm.... no! Here are some of my favorites of Bathsheba's dresses besides of course that blue dress she's wearing in the picture above! 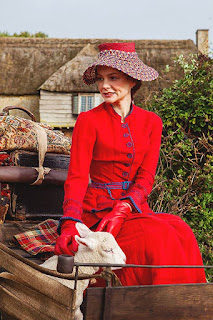 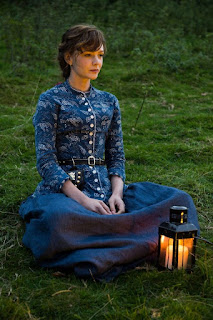 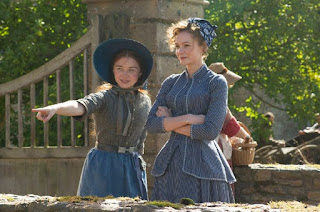 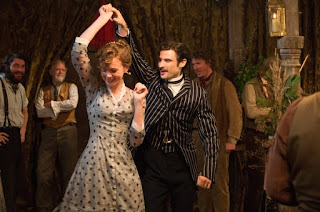 Lovely! Absolutely lovely! Is it a requirement for period dramas to have gorgeous music because it seems like they all do and this was absolutely no exception!

There is even a duet sung by Bathsheba and Mr. Boldwood that is lovely!

The film is rated PG-13. It has two brief sexual moments but not explicit and in my opinion not too bad and easily fastforwardable (I know that's not a word but it should be). I'm the queen of dimming my computer screen when there's objectionable content and I utilized that method quite effectively with this film. Overall, it's cleaner than I thought it would be but obviously not as clean as I would want it to be. I'd be comfortable showing it to my little sister and just fast forwarding or dimming the screen for those scenes. However, everyone's standards are different so I always recommend IMDB's content advisory/parent's guide which you can view HERE. 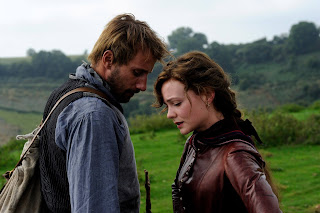 Overall I was actually surprised by how much I enjoyed this film. As I stated at the beginning I'm not positive how accurate it is to the book but even just as a movie it's very enjoyable though I think if you don't know the storyline you might be a little lost at times as it does move fast.
Have you seen it yet? What did you think?