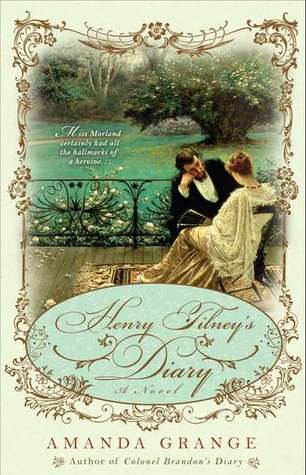 
Synopsis from Goodreads: A charming retelling of Jane Austen's Northanger Abbey--a tale of gothic misunderstandings through Henry Tilney's eyes... At the age of four and twenty, Henry is content with his life as a clergyman, leaving his older brother Frederick to inherit Northanger Abbey. But General Tilney is determined to increase the family's means by having all three of his children marry wealthy partners.During a trip to Bath, Henry meets the delightful Miss Catherine Morland and believes he may have found the woman he's been looking for, although she has no great fortune. When the General takes an unusual liking to Catherine and invites her to visit the Abbey, Henry is thrilled. But just as in the Gothic novels Henry loves, not everything is as it seems.

Henry Tilney is one of my very favorite Austen heroes. Right behind Mr. Knightley I think.... I go back and forth. I think I could most see myself a Henry Tilney though. He's fun, he's hilarious, he's got snark galore and did I mention hilarious? He also loves reading, loves his sister, is kind, discerning and willing to tell the hard truth.
Amanda Grange does a pretty good job of brining this delightful hero back. My main problem with it would be that I never felt like she quite captured Henry's "voice".  She did a pretty good job but not a great job as I felt she did with some of her other books. I did love how she brought out Henry and Eleanor's beautiful brother-sister friendship. The author took a slightly different approach with their brother Frederick which I'm still not sure if I liked or not. It also drew a little on Eleanor's romantic interest which wasn't all bad. I felt like the book wasn't as harsh with General Tilney as it should have been until the end... and then boy was it harsh! Ugh General Tilney! We do not like him.
Overall I did enjoy it. There were definitely some moments when I went awwww and grinned like an idiot. There was one quote about that Isabella Thorpe that I especially liked.


"Miss Thorpe's mouth praise Mr. Morland, but her eyes invite everyone else."

Spot on!
Read or not? If you're a Northerner Abbey fan... Read!