We're done!!! Well.... as I admitted last week, I did finish a week early, but all of the rest of you should be done now (unless there's slackers... for shame! ;)).
I spent the last week re-watching all the different versions of Emma (except the 1972 version... I'm not really interested in watching it). It was very cool to see them back to back right after re-reading the book. I'll be putting out reviews of all of them with some assistance from Heidi who will be supplying some guest post reviews! :) Be sure to look for those this week!
Next week I'll be hosting some giveaways to close out our 200th Anniversary Read-along! Stay tuned for those as well!
Now on to our final book discussion! 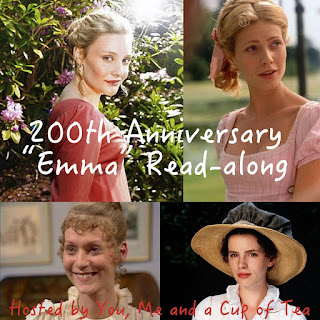 First let's discuss Frank's letter to Mrs. Weston. To begin with, his excuses for his behavior with Emma are dumb. I'm just going to be blunt here.... dumb! He can't just assume that Emma is someone who won't be attached to him! That's ridiculous! Additionally, he opened himself and Emma up to gossip! Plus it caused Jane so much pain!!! Also, yes, thank you for admitting you were a jerk and didn't come until Jane was in Highbury! I did think when Emma and Mr. Knightley were talking about the letter it was so cute when Emma wanted him to read it that he said "I'd much rather be talking to you." :)
A few last thoughts on Frank Churchill, I would say that in his conversation with Emma at the end, you could tell he was scarcely repentant of his actions. I love this quote after their conversation "She (Emma) had never been more sensible of Mr. Knightley's high superiority of character." That's right Emma! Frank is a numbskull! That was obvious from day one! Mr. Knightley for the win!
I love that Mr. Knightley and Emma work out the plan to live at Hatfield after they are married. One thing I always love about Emma is how considerate she is of her father and how much she loves him. I imagine he would not have been the easiest person to love sometimes.
Poor Harriet loses again in this situation.... at least first off. I'm glad she ends up with Mr. Martin after all and I'm glad that Emma finally has the sense to see the good of the match. I do think Mr. Knightley was right when he said about Harriet, "I should say she was a good-tempered, soft-hearted girl, not likely to be very, very determined against any young man who told her he loved her." I think Harriet is rather persuaded by her emotions.
Emma also finally takes the effort to become friends with Jane and while I don't think they'll ever be super close, I think that they will be good friends still. Jane is an intriguing character and I'll just say that I would not have put up with Frank one bit! She is far more forbearing than me.
It's cool that Mrs. Weston gets a baby girl! I can only hope with the three new couples that more babies would be on the way!!! :)
I think Emma and Mr. Knightley's conversation about calling him by his first name was hilarious! Mostly I thought so because I always call him Mr. Knightley and I am always forgetting this first name. Most of the time I have to go look it up. His name just is Mr. Knightley. :)
Overall at the end of the book, you can see how Emma has been completely turned around and how all of her fantasies have been destroyed. I think in a lot of ways Emma needed to pay attention to reality and stop living in a world of imagination. Thankfully she had Mr. Knightley there to straighten her out! ;)

So thoughts on these last few chapters? Gushings to convey on the cuteness of Mr. Knightley and Emma?!?! ;) Comment below!