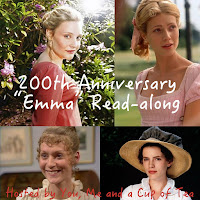 The 200th Anniversary Read-along is over! :( It was so much fun to do and I learned so much from the discussion and I can now say that Emma is far higher than my estimation than it used to be. Thank you everyone who participated. The discussion was awesome! If you haven't checked out the movie reviews that I posted last week be sure to check them out. I'll link to them here.
Emma- 1972 (Doran Godwin) (Guest post)
Emma- 1996 (Gwenyth Paltrow)
Emma- 1996 (Kate Beckinsale)
Emma- 2009 (Romola Garai)
Also, everything posted to do with the 200th Anniversary read-along can be found under the 200th Anniversary Emma Read-along tag.

So to the giveaway!
For the first giveaway of the 200th Anniversary Emma Read-along is the actual book Emma! Singular thought eh?
Penguins Classics is releasing a special annotated version of Emma for it's 200th Anniversary on September 29th (aka tomorrow)! Whoever wins this giveaway will get their very own brand new copy of it!
Participation in the read-along is not a qualifier for participation in this giveaway but it does win you bonus points!
a Rafflecopter giveaway

Have fun and join in! This giveaway is open until next Monday!
And yes, there will be more giveaways this week for the read-along! Stay tuned

Follow my blog with Bloglovin
Posted by Lois Tinúviel at 10:28 AM