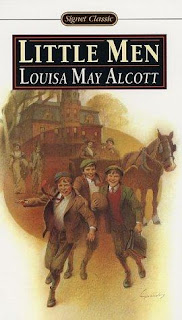 I know a lot of people like this one better than Little Women but I am not one of them. To be honest, I thought I would... but I didn't. It's still good though. :) Now of course this was a re-read but it's been awhile since I first read it so in a lot of ways it was like reading it for the first time.
My main complaint with the novel was that it took a very childlike view of God, Christianity and life. If you're just kind and love someone enough eventually they will love you too. That's not how life works and that's not a Christian view either. Feel free to argue with me about that.
Besides that though I did like it. :)
I enjoyed that it was about a bunch of boys, being a tomboy myself. That was a lot of fun and their antics were hilarious.
I guess I kind of forgot that Meg's husband died but that was horribly sad!
So overall enjoyable with minor qualms. :)
Fun fact... I guess there are film versions of Little Men.... a fact I was not aware of but I guess I probably never looked. However, from what I can tell from IMDB none of them are that great. However, if anyone has seen as decent version let me know because I'd be interested to watch one.