For the monthly motif challenge, mount TBR challenge, alphabet soup challenge, 42 challenge and author a-z challenge I read C.S. Lewis's last novel in his space trilogy, That Hideous Strength. It took me a long time to finally finish this trilogy! I started it several years ago when I read Out of the Silent Planet at my aunts. I then re-read it with a book club. A year later I read Perelandra and now finally a year after that I have finished That Hideous Strength! 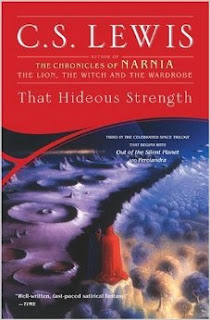 Synopsis from Goodreads: The third novel in the science-fiction trilogy by C.S. Lewis. This final story is set on Earth, and tells of a terrifying conspiracy against humanity. The story surrounds Mark and Jane Studdock, a newly married couple. Mark is a Sociologist who is enticed to join an organisation called N.I.C.E. which aims to control all human life. His wife, meanwhile, has bizarre prophetic dreams about a decapitated scientist, Alcasan. As Mark is drawn inextricably into the sinister organisation, he discovers the truth of his wife's dreams when he meets the literal head of Alcasan which is being kept alive by infusions of blood. Jane seeks help concerning her dreams at a community called St Anne's, where she meets their leader -- Dr Ransom (the main character of the previous two titles in the trilogy). The story ends in a final spectacular scene at the N.I.C.E. headquarters where Merlin appears to confront the powers of Hell.

I liked That Hideous Strength a lot but it was incredibly weird... let's be honest though... the whole trilogy was. If you've read Frank Peretti's This Present Darkness and Piercing the Darkness it reminded me of them a lot. It was slower at the beginning but picked up as it went on. Putting science fiction and Merlin in the same room was a weird mix but Lewis made it work. In my opinion Lewis wrote the space trilogy for an older audience than the Chronicles of Narnia and That Hideous Strength is especially written for an older audience. There are subtle sexual themes throughout it that probably would go over children's heads. For example, one of the members of N.I.C.E., the Fairy, is lesbian.
I liked the main characters... the couple Mark and Jane. Oftentimes I would get frustrated with Mark being so dense and not getting that N.I.C.E. was a bad organization but I liked watching his metamorphosis throughout the novel. Jane wised up a lot faster than Mark but she still had a lot to learn. Ransom, the main character from the previous two novels doesn't make an appearance until halfway through the novel. Merlin in modern day was humorous. The other secondary characters worked well.
At the end it was interesting to see as Mark and Jane confronted difficulties and though they did not profess Christianity, turn to God in these times, realizing that He was their only hope. In the end, they stuck to those realizations.
Overall I enjoyed That Hideous Strength and would recommend it wholeheartedly (once you've read the previous two of course). Have you read it? What are your thoughts on it?