For the literary movement challenge, library reading challenge, author A-Z and the classics club I read Emile Zola's novel Germinal. This was my first Emile Zola book so I really didn't know what to expect going into it.


Synopsis from Goodreads: The thirteenth novel in Émile Zola’s great Rougon-Macquart sequence, Germinal expresses outrage at the exploitation of the many by the few, but also shows humanity’s capacity for compassion and hope.Etienne Lantier, an unemployed railway worker, is a clever but uneducated young man with a dangerous temper. Forced to take a back-breaking job at Le Voreux mine when he cannot get other work, he discovers that his fellow miners are ill, hungry, and in debt, unable to feed and clothe their families. When conditions in the mining community deteriorate even further, Lantier finds himself leading a strike that could mean starvation or salvation for all. 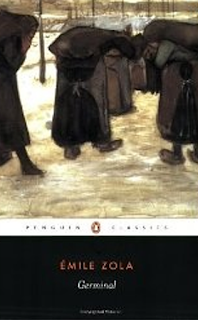 I have very mixed feelings about this book. It is gritty... super gritty. It's also sexually crude. Not graphically like I'm sure novels are nowadays it's just crass. I don't appreciate that. It jus talked about sex way too much for my comfort level. Zola is trying to make a point with the crudities and the grittiness but I still don't like it.
A lot of the themes I saw in this book really showed through towards the end.
First there are the miners. Dirty poor and just dirty in general. They labor and break their backs for a pittance. They are half starving most of the time, sick, have to share beds and are freezing. For enjoyment they drink and have sex... with everybody... seriously. They crave what their masters have.

Then there is the owner of the mines.  He is a man with all the money all the food the nice house and really essentially everything the miners are striving for. However, he is unhappy. His wife has been unfaithful to him multiple times and most recently with their own nephew (GROSS!!!!). He craves to have sex with a wife who is faithful to him. He craves what the miners have.
So as you can see here, Emile Zola is pointing out that both groups desperately want something they think will make them happy but each has what the other wants and with it they still aren't happy.

This brings us to the strike. Now I'm going to be honest with you. I don't like strikes... I think for the most part strikes are stupid. When it comes to strikes I prefer North and South's outlook on them as it shows both sides in a positive and negative light. The strike held together fairly well at the beginning but at the end it went so south that if there was the end of the world it would have reached it. It was brutal, mad, disgusting and out of control.

The characters were all interesting but entirely immoral. In fact the book was basically void of God. When he was mentioned it was to say that he obviously didn't care about them (the miners). Lantier was better than some but in the end he degraded to the same level. Catherine I felt sorry for throughout the novel. She made a lot of bad choices but she was also forced into a lot of bad situations. I rooted for Catherine and Lantier to get together throughout the novel... not in the way I knew they would end up getting together but actually getting married. With the way book was though I knew that wouldn't happen.

I do think Zola is a very good writer and he kept me intrigued the whole time. I read the book essentially in two days because I was so interested to see what happened.

Overall I found the book very interesting but it is not something I would hand my child. It's interesting I was asking my cousin if she had read any of Zola's novels a couple months ago and she said no, but from what she'd heard his books were alongs the lines of "Chaucer, Rabelais and Balzac" (Music Man) and sexually inappropriate and innocent me was all like "no that couldn't be!" She was right. It got a three stars from me on Goodreads. I don't see myself reading anymore of Zola's works but in retrospect I'm glad I read this one.

Are you a fan of Zola? What are your thoughts on his books?