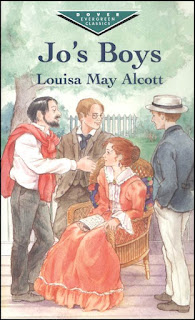 Better known for her novels "Little Women" and "Little Men," Louisa May Alcott continued the story of her feisty protagonist Jo in this final novel chronicling the adventures and misadventures of the March family. Entertaining, surprising, and overall a joy to read, "Jo's Boys" is nevertheless shaded by a bittersweet tone, for with it Alcott brought her wonderful series to an end. Beginning ten years after "Little Men," "Jo's Boys" revisits Plumfield, the New England school still presided over by Jo and her husband, Professor Bhaer. Jo's boys -- including rebellious Dan, sailor Emil, and promising musicain Nat -- are grown; Jo herself remains at the center of this tale, holding her boys fast through shipwreck and storm, disappointment... and even murder.Popular for more than a century, the series that began with "Little Women" continues to hold universal appeal with its powerful and affectionate depiction of family -- the safe haven where the prodigal can always return, adversity is never met alone, and our dreams of being cherished, no matter what our flaws, come true.

This novel was a nice conclusion to the story that began with Little Women. It still contained some of the qualms I had with Little Men (see them HERE) but it was still enjoyable. I saw another's review of it and it called it preachy.... I guess I would have hesitated to use that word myself but I think they're probably right. I'd say Jo's Boys and Little Men maybe more so but Little Women is as well. Now, to be clear I'm a Christian and strongly so, but I still don't like my books to be preachy.
Overall though it was great to see everyone getting married and having adventures. Dan's fate was sad but to be honest I can only see him as a bachelor.... I'm not sure I see him married. I know a lot of people are upset with Amy for not letting him marrying Bess but I don't think that's exactly fair. First off, Dan never even asked. Secondly, we don't even know if Bess was interested in him in that way. Thirdly, I think let's be fair to Amy and realize that in real life, we probably would have second thoughts about our daughter marrying an ex-convict. Granted he's matured and changed but even I would want to give it some time. Those are just my thoughts.
I was actually more upset with Meg for not wanting Daisy to marry Nat. I also felt like they changed Nat in this book. In Little Men he was supposed to be a protege fiddler and a good young boy who as I recall never really has any major problems. In Jo's Boys they make him out to be an average fiddler and an okay boy that really doesn't show too much promise but well enough. So I just thought all of that was dumb. However they ended up together in the end so I can't complain too much.
Everyone else's marriages made me happy though.
Josie was interesting to read about and I liked to see how she grew up throughout the book. She scarcely made an appearance in Little Men so she was relatively new to the series.
Jo's writing career made me laugh. Only Jo. :) Jo is just always my favorite character. Jo is Jo. :)

Overall with this re-read of the Little Women series I fear I became a little disillusioned with this series. Yes I still enjoy it but it's just not great as I remember it growing up. Too idealistic, too preachy and too childish. What makes the series for me and probably always will is Jo. :)