Book Review- To Kill a Mockingbird 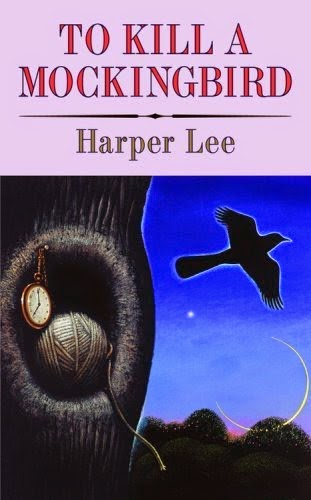 Here's the synopsis from Goodreads (unfortunately a little sparse in the synopsis area and a lot stronger in the "this is an an amazing and award winning book area")- The unforgettable novel of a childhood in a sleepy Southern town and the crisis of conscience that rocked it, To Kill A Mockingbird became both an instant bestseller and a critical success when it was first published in 1960. It went on to win the Pulitzer Prize in 1961 and was later made into an Academy Award-winning film, also a classic.Compassionate, dramatic, and deeply moving, To Kill A Mockingbirdtakes readers to the roots of human behavior - to innocence and experience, kindness and cruelty, love and hatred, humor and pathos.

I'm not really sure where to start with a review for this book. So much has already been said about it that I doubt I'm saying anything original.
I guess I'll talk about a few of the characters that were left out from the movie or maybe underplayed in the movie that I felt added yet another great layer to the book.

She was actually in the movie but I felt was an underplayed character. In the book you see how much she cares for the children and loves helping them out and you just get more of her in general- her opinions and convictions.

Another severely underplayed character in the movie. In the book, after she insults Atticus, Jem tears up her flower bed. As a punishment he has to go read to her every afternoon after school. After she dies (she was very sick) Atticus tells him that she was trying to break her morphine addiction and by Jem reading to her she was able to keep distracted from taking her morphine. This all is very touching and I think the children learn a lot from it. I wish the movie had included it but as it wasn't an essential part of the story, I can see why it wasn't included.

This character was completely left out of the movie. Basically she is the neighbor across the street who loves to gossip and share her opinions.

Atticus's younger brother. He seems a lot like Atticus to me and I really liked him. As Scout said though, he had a lot to learn about raising kids. :)

Atticus's sister. Earlier on in the book I didn't like her as much but as it goes on you begin to appreciate her more. Even though she can be a snob she really does care about Atticus and the trial.

There are handful of other characters that were left out of the movie but these are the ones that stick out to me.

The three main characters, Atticus, Jem and Scout, I can't say enough about how much I love them. I noticed this time reading it though more about Jem and the struggles he's growing through with growing up. I sympathized with him but then I also sympathized with Scout. I loved how she ran around in overalls as I was quite a bit of a tomboy as a child. Her innocence and bluntness were sweet and often uncomfortable. I imagine she has a lot to learn before she'll be a lady. ;)

Overall, I just love this book! I know this is a disorganized and abnormal review but that's me all over. ;)
I'm now more intrigued than ever for Go Set a Watchman to come out later this year. :)