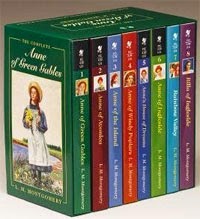 I didn't fancy writing a review for each of the Anne of Green Gables books so instead I grouped my reviews for all of the books in this one post. They were all re-reads.

I listened to a beautiful audiobook version of this narrated by Barbara Caruso. This has been a much re-read book in my past and once again I was blown away by it. The characters are perfect and the story is heart wrenchingly beautiful. Anne, Matthew and Marilla make the story for me and the spicy secondary characters like Mrs. Allen, Miss Stacy, Dianah and of course Mrs. Lynd just make it even better. Listening to this story made me long for my fanciful childhood even more but watching even Anne grow up reminded me that it must happen to us all. Seeing that Anne still kept much of her same imaginative spirit also reminded me that even as grown ups we can still act and think a bit childishly at times. :)

Once again a lovely audiobook narrated by Barbara Caruso. This second installment in the series brings the introduction of Davy and Dora, twins who Marilla takes charge of. They're a great addition to the story in my opinion and like Anne help Marilla. It's fun to see Anne start teaching a school of her own and develop relationships with her students and begin to make new friends. Mr. Harrison is hilarious and his parrot... love it! :) Some of Anne's odder theology comes out in this but it's still a great book. :)

Anne of the Island

Can I just say Barbara Caruso is an awesome narrator? If possible, she makes the books even better!  Anne of the Island just really frustrates me at times. The whole time I'm just thinking that Anne needs to say yes to Gilbert and it drives me crazy! I just don't think she realizes that she loves him but she has a ton of time to think it out and still she doesn't! Come on Anne! Then, I was so upset with her romance with Roy Gardner. I don't think she led him on exactly, because she honestly thought she liked him and was going to marry him but still she kind of blew it! She was having warning signs for a couple months or so before he proposed to her that maybe she wasn't in love with him and she kept ignoring them! She should have been figuring it out sooner and backing off so Roy didn't have to go through that heartache. However, at the end I was just so happy that Anne and Gilbert got together I kind of forgave her.
I feel like this book was a lot about Anne being brought down if you know what I mean. She had high opinions of her writing and the flowery speeches but then her story got rejected. She had a tall dark and handsome ideal and then she realizes that he really isn't the man she wants to marry. I think she matures a lot in this book through her many mistakes.
Besides that though I loved the whole atmosphere of Patty's Place and Anne's roommates and Aunt Jamesina. I didn't remember this book very well so when Phillipa Gordon popped up I didn't remember who she was or what happened with her and initially I didn't care for her much but by the end we had gotten to know her better and had seen her mature and get married to Jonas and I really loved her. I can see myself a bit in Phillipa.

This book is slightly different from the others in that is told mostly in the form of letters from Anne to Gilbert. It's kind of a space filler in the series. Don't get me wrong, I do like it, but it's just kind of there instead of I feel being especially unique like many of the other books.
One of my disappointments about this book is that it scarcely has Gilbert in it. However, there are once again a variety of new characters that Anne meets that spice up the story beautifully. Overall, it was still a beautiful and fun book full of antics that only Anne could have.

They're finally married! I think with Anne we feel her sorrow and joy as she leaves Green Gables for good and moves with her new husband Gilbert to Four Winds Point. Once again new and interesting characters are introduced and Anne attempts to solve the worlds problems. ;) The saddest part of the story is Anne losing her first child Joyce. It's incredibly heartbreaking but I think Montgomery did the right thing in writing it like that... I say that from an author's point of view. Overall, I guess I would have to agree with people that the books kind of start losing their uniqueness and creativity at this point but they're still lots of fun to read. :)

Now Anne has five children and in the book she gives birth to a sixth and last. In this book we get more of her children's antics but however old Anne is she never stops her own antics. :) Even though as always with the Anne books I loved it, it is probably my least favorite of the Anne books.

This one really just focuses on Anne's children but it's lots of fun. The Meredith children get into trouble that we thought only Anne could achieve. ;) This book is pretty sweet. :)

Just a little ways into this book I began to realize that I really related to Rilla. She's a young girl, struggling with being young and learning to growing up and then being sort of forced to grow up in the midst of war and raising a war baby (I'm kind of jealous of that.. the baby not the war). I actually staid up late one night to finish the book... I had half of it left and didn't plan on finishing it that night but I obviously got carried away. Because it was so late and I was tired (that's my excuse here!) I almost cried three times during the book! I don't cry over books so this astonished me! It was a pretty heartbreaking book though. It is one of my very favorites of the series and a beautiful ending to it.

So as I was finishing up the series I was thinking a lot about Susan, their maid/nanny/cook. Sometimes, I feel that her character is a little forced and that she is supposed to make us laugh but sometimes instead I just feel like her comments are predictable. She's always saying the same kinds of things. Eventually she got on my nerves a little. I actually thought it interesting to compare her to Rebecca Dew from Anne of Windy Poplars as she is somewhat similar to her. However, I always liked Rebecca and she never got on my nerves. I guess I found her more original. Thoughts anyone on these two characters?

It has been an incredible amount of fun re-reading the Anne of Green Gables series. I don't know how many times I've re-read the books but I think this time was unique as I was reading them as an adult (at least I like to think of myself as an adult) and experiencing them in different formats (audiobooks and real books). I have so much nostalgia built up around those books and the films that I don't think anyone could ever convince me to even think about disliking them. Montgomery created such a variety of fun, quirky, interesting and real characters that I think we can all find someone to relate to when we read them. If you haven't read them, I don't know how you're still living but with your final breaths of life read these books and then re-read them! ;) You won't regret it!