Book Review- The Bridge to Terabithia

Spoken of as the only book that's every made me cry, The Bridge to Terabithia was a re-read for me this year and went toward's the newberry challenge, hard core re-reading challenge. 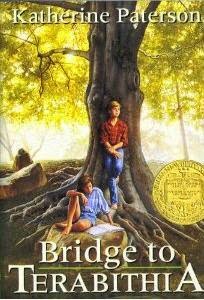 Synopsis from Goodreads: Jesse Aarons' greatest ambition is to be the fastest runner in his grade. He's been practicing all summer and can't wait to see his classmates' faces when he beats them all. But on the first day of school, a new girl boldly crosses over to the boys' side and outruns everyone.That's not a very promising beginning for a friendship, but Jesse and Leslie Burke become inseparable. Together they create Terabithia, a magical kingdom in the woods where the two of them reign as king and queen, and their imaginations set the only limits.

First off, I didn't cry this time... for the record. Secondly, spoiler alert!
I love the imagination aspect of this book and the friendship that developed between Jesse and Leslie. As someone who really struggles with having a guy-girl friendship I can really appreciate that Jesse and Leslie were able to have a perfectly fine friendship.
This story is a little odd, and a little simple but interestingly enough works. It's not a great story by any means, but it is a story that talks about life and death through the eyes of children in a compelling way. There's not much I can say about it that hasn't been said before. However, I will add on a closing note that the reason it made me cry as a child when I first read it was because I was so shocked that Leslie died. I had never read a book where a main character died and I remember re-reading the lines over and over again in disbelief. Do I think it's bad that she died? No! I think it really worked with the story and made sense. I think it's kind of dumb that it was banned from school libraries because while yeah it made me sad at the time it did't traumatize me. If children don't understand that bad things happen and people die then they're not going to get very far in life. I think this story actually does a good job with that aspect and could be good for children to read for that very reason. The theology isn't perfect in the book on that level by any means but the essentials are there. As I said, it's a simple and not great book, but it works.
That's kind of a long "closing note" but I hope you get my drift. :)

Follow my blog with Bloglovin
Posted by Lois Tinúviel at 10:11 AM