Book Review: Under the Greenwood Tree 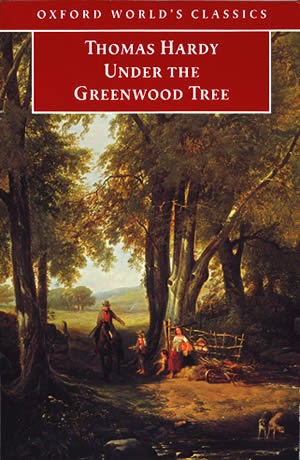 For the Mount TBR Pile challenge and the Alphabet Soup challenge I read Thomas Hardy's Under the Greenwood Tree.

While Under the Greenwood Tree is considered to be the happiest of Thomas Hardy's novels, I was left at the end wondering whether or not this was truly the case. Fancy Day reminds me a lot of Cynthia from Elizabeth Gaskell's Wives and Daughters. I think she's a better version of her, but in essence I think she is her. Dick Dewey had all of the warning signs before their marriage but I'm amazed he still married her. At the end when Fancy is waiting for him to come and worrying he won't, I was kind of hoping that he wouldn't. On the other hand, Dick has an issue with jealousy, though not necessarily unmerited. I'm not sure if I particularly cared for any of the characters in this book too much except Dick's parents. They seemed like decent people.
Overall it was a pretty light novel to read but not likely one that I will ever re-read.
There's a film version of it starring Keely Hawes who incidentally played Cynthia in Wives and Daughters. Coincidence? I think not! ;) Hopefully I'll get around to watching it soon. :)