It's Jane Austen Week over at Wonderland Creek!!!!! Go check it out and join in the fun! Today I'll be answering her tag answers!!!!

1. On a scale of 1 to 10, how much of a Jane Austen fan do you consider yourself? 10!!!!!!!!!!!!!!!!!!!!!!!!!!!!!!!!!!!!!!!! Obviously!!!!!!!
2. If "they" would make a new Jane Austen Movie, and you would be able to be cast in it, which Jane Austen character would you most like to play? Catherine Morland.... because I'm the most like her. But I also think it would be fun to play a goofy character so when I'm older I think it would be such fun to play Mrs. Bennett!
3. Is there any felicity in the world superior to a walk? READING!!!! Duh! ;) But a walk is quite amazing I'll admit.
4. Who's your favourite Jane Austen 'villain'? (As in 'villain' meaning 'the bad guy.') I hate them all!!!!!!!!!! Who do I love to hate the most? Mrs. Noriss from Mansfield Park probably. Who do I think is the "best" of the bad guys? Maybe Frank Churchill though he annoys me to no end also.
5. What/Who introduced you to Jane Austen? I grew up on Jane Austen. Both my mom and my dad are big fans. We grew up watching Jane Austen movies, especially the 1995 Pride and Prejudice and when I was around ten I read Pride and Prejudice. The rest is history. ;)
6. Did you love/enjoy Jane Austen immediately, or has there been a time when you hated (um, prejudged) it? I've always loved it!
7. Who, in your opinion, is the funniest Jane Austen character? That's hard! Maybe Mr. Bennet or Mrs. Bennet but Mr. Collins cracks me up too!
8. Do you quote Jane Austen randomly in public? Yes! I quote Jane Austen randomly wherever I go! There are people who don't? ;)
9. Are children allowed to eat cake on weddings? Their health! My goodness! What would Dr. Perry say? ;)
10. What is your reaction when you hear that an aquaintance (e.g. A lady at Church) of yours loves Jane Austen? Instant friendship!!!!!!! If it's a guy..... instant marriage!!!!!! ;) Just kidding. ;)
11. Who writes better letters, Mr Darcy or Captain Wentworth? (If you forgot what the letters were, shame on you, instead tell me if you prefer Strawberries to Chocolate or not.) Well they wrote different kinds of letters so I'm not sure it's fair to compare them. Captain Wentworth does write a beautiful proposal/love letter though so I guess I'll chose him. :)
12. Which Jane Austen heroine do you relate the least to? Emma Woodhouse. She's grown on me as a character but I don't relate to her.
13. What's your favourite Jane Austen house (from one of the movies)? Pemberly!
14. What's your favourite Jane Austen dress (from one of the movies)? Hard question! Let me peruse some pictures. I love all of Lizzie's dresses but I think my favorite is her dress at the Neverfield dance. I do NOT like Miss Bingley's dress. 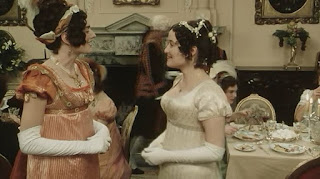 15. Can you turn off lit candles with your fingers? I've never tried to because I've been too afraid but I've always wanted to since I was a child since Mr. Darcy can!

Follow my blog with Bloglovin
Posted by Lois Tinúviel at 8:16 AM