Another difficult letter for me in the Author A-Z Challenge was the X. It took some digging to find an author whose last name began with an X. However finally I did. So for the Library Reading challenge and the Author A-Z challenge I read Qui Xiaolong's novel Death of a Red Heroine. 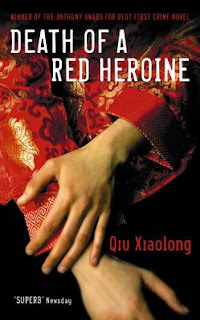 Synopsis from Goodreads: A young “national model worker,” renowned for her adherence to the principles of the Communist Party, turns up dead in a Shanghai canal. As Inspector Chen Cao of the Shanghai Special Cases Bureau struggles to trace the hidden threads of her past, he finds himself challenging the very political forces that have guided his life since birth. Chen must tiptoe around his own superiors if he wants to get to the bottom of this crime, and risk his career—perhaps even his life—if he wants to see justice done.


Overall I liked this book and it would have gotten four stars from me except towards the end it got raunchier so I bumped it down to three stars. I feel like I've had to complain about sex stuff in a lot of books recently! It's what I get for reading more modern novels. :(
The author is a poet and that shows in this novel as he makes the Inspector an amateur poet of sorts and a deep lover of poetry. Poetry ends up getting quoted randomly in it but not distractingly so. The author makes it work.
One of my favorite parts of the book was learning about Chinese culture as I know little about it. The book was written in the 90s so of course Chinese has changed somewhat since then. Ah the 90's. Something that was CONSTANTLY mentioned in this book. There were an incredible number of statements that were basically this "You don't want to have sex before marriage? It's the 90's!" "The man's having an affair? It's the 90's!" Because apparently now that it's the 90s nobody has any morals? They had statements like that enough that it really started to irk me.
I liked the characters but actually the Inspector's subordinate Yu was my favorite character as well as his wife. All of the characters were intriguing though.
Overall when I read this book it felt sadly dystopian. China is a sad, sad country and the control that the government wielded over the people was heart-breaking. I felt Chen's frustration with the government through the whole book and the end, while they solved the mystery, was as unsatisfying to me as it was to Chen. Stupid government.
Overall I liked it but there was just a little too much raunchiness for me towards the end.