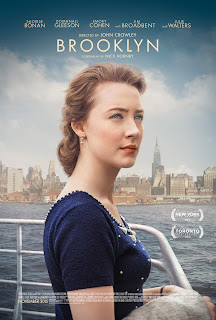 Synopsis from IMDB: In late 1951, Eilis Lacey (Saoirse Ronan), a young Irish girl, emigrates to Brooklyn. Sponsored by Father Flood (Jim Broadbent), a priest from her native town Enniscorthy, she is assured to find a full-time job there. But the early days are tough, seasickness being soon replaced by loneliness and homesickness, two feelings all the more acutely felt by Eilis for having had to leave behind her widowed mother and her dear sister Rose (Fiona Glasscott). She nevertheless little by little manages to find her footing by adapting to her job as a salesgirl, by studying bookkeeping at Brooklyn College as well as with a little help from both Father Flood and Mrs. Kehoe (Julie Walters), the owner of the boarding school she now lives in. And not only does graduation follow but love shows its face in Tony (Emory Cohen), an Italian-American plumber, full of adoration and respect for her. They end up marrying, although keeping the thing secret. It is at that point that tragedy strikes: Rose suddenly dies. Which incites Eilis to return to Enniscorthy, in order to share her sorrow to support her mother morally. And there a strange thing happens : she gradually gets lured by the charms of her native place, going as as to let herself be wooed by Jim Farrell (Domhnall Gleeson), a young local.

This was a really sweet film and I enjoyed it a lot though it certainly had flaws. It had themes of homesickness, family, finding a new home and finding love.

I loved Eilis and really related to her. Her first days starting out at the shop were just like mine first starting out working at the library. I was painfully shy. Later though she and I both developed to the point where we could easily talk with customers. 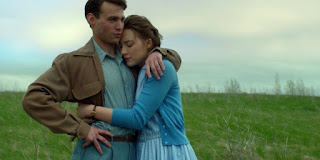 I enjoyed the owner of the boarding house, Mrs. Kehoe. She humored me greatly.
The other girls at the boarding house were fairly dreadful though! As the film went on I warmed up to them a little bit but they were just really snooty and horribly silly. Here's a delightful quote from Mrs. Kehoe about those girls. "I'll tell you this much: I am going to ask Father Flood to preach a sermon on the dangers of giddiness. I now see that giddiness is the eighth deadly sin. A giddy girl is every bit as evil as a slothful man, and the noise she makes is a lot worse."
Tony was adorable! His devotion to Eilis and his honesty were so sweet. I was actually re-reading the Little House books at the time I watched this film and I have decided that Almanzo Wilder looks like Tony. That is exactly how I picture him now and you can't shake me out of that opinion. ;)
I loved Tony's family as well. When Eilis first visits his family and he warns her about his little brother I loved it! She asks what her brother is going to do and Tony replied "I don't know! That's the scary thing." That is so my family (especially my little brother)! Wow betide if I ever bring a young man home. Who knows what they'll do! ;)

Unfortunately it existed. What most upset me in this film was the fact that Eilis and Tony decide to get married before she goes back to Ireland but then they sleep together that night and the next day get married! Like what's the point? Could you have not waited one day? Not too much is shown in that scene thankfully. Underclothing was quite modest in those days. I still do not appreciate that though!
I'm not sure if this qualifies under objectionable content or not but I was frustrated with Eilis for entertaining Jim Farrell while she was in Ireland. I think it started out innocently enough and I really think that Eilis's momentary falter of being interested in him stemmed mostly from her homesickness. I just felt bad for him because he seemed like a really great guy and she hurt him in the process of it. Thankfully she got it togther and goes back to Tony!
There are a couple bad words in it too.
Overall this film was pretty clean and I was glad of that but what it did have in it annoyed me.

The fashion in the film was GORGEOUS! I loved it. Here are just a few pictures. 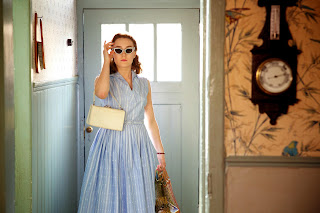 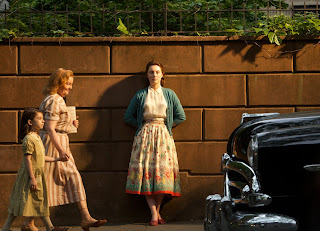 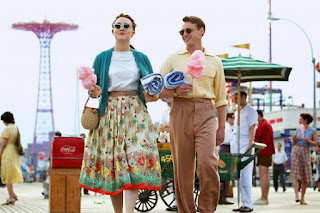 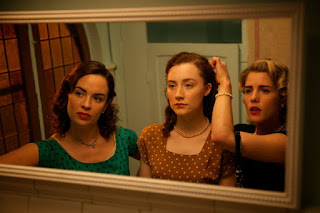 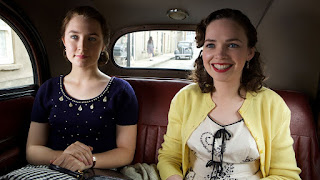 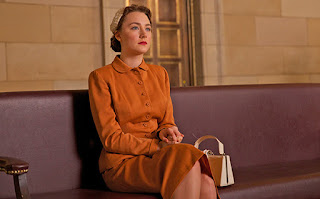 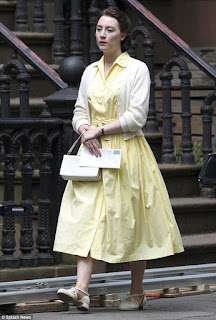 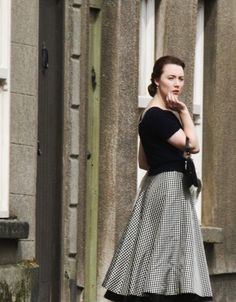 Overall I enjoyed this film. Despite my complaints about it, it was still refreshing to watch it considering the many far more immoral romantic films out there.