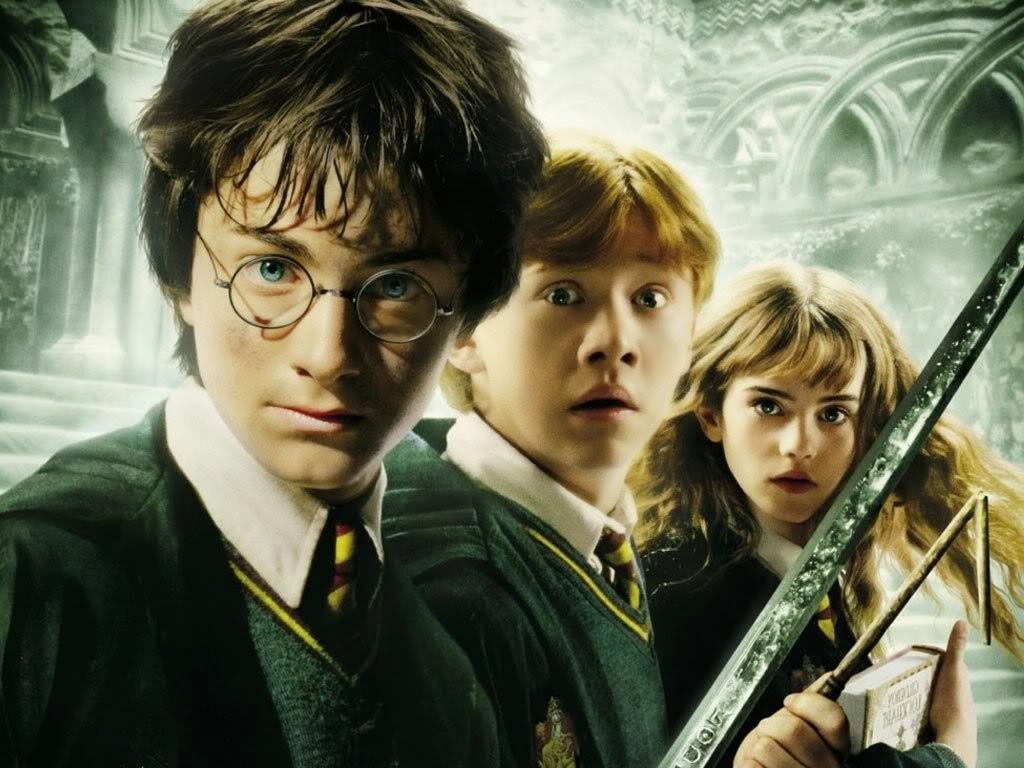 For my re-reading challenge this year I re-read all of the Harry Potter books, not that I needed to, I've done it many times before. However, I also had to write a review for them for my my re-reading challenge and that is something I have never done before. I have mixed feelings on so much from these books but I also love them so much. Therefore, my review may be jumbled. Basically, I'm going to talk about the aspects I didn't like and assume I loved everything else. :)

First things first, I am a Christian and yes I read Harry Potter. I happen to think that the Christians that don't read Harry Potter have somewhat valid concerns, however, in my opinion if you read them with a discerning mind knowing that these books are just like any other fantasy... not real, there is little there for concern. I will probably not give my young children Harry Potter... I will probably wait until they are older or at least if they are younger read it with them so we can talk through some of the issues it presents. I read them when I was a teenager and I think that was a good age to enjoy them at while still being discerning.

So a few thoughts on the books. One of my least favorite aspects of the later books (starting in the fourth book) is their incorporation of teenager love stuff. Not that I mind there being romance in the books, just that it was too mushy, silly and over the top. On that note, I am glad that everyone ended up marrying who they did. Ron and Hermione were meant for each other no matter what J.K. Rowling says! Harry and Ginny were nice together as well though I agree with my brother in that Luna Lovegood and Harry could have worked together. I'm not sold on Ginny... I think Hermione telling her to move on from Harry was a good idea but then dating multiple other guys to get to him seemed a little ridiculous to me. However, it all turned out in the end and I'm happy with it. :)

Now I would love to hear your opinions on Snape. All through the series J.K. Rowling drove you crazy trying to figure out if he was good or bad. His story shocked me at the end I must say but I liked it. However, I don't get people liking Snape and thinking he was so romantic loving Lilly Potter all these years because frankly I thought it was rather creepy and I thought all the time that he knew her when she was living he was kind of creepy about her. Yes, he was very brave and he made the right decisions in the end, but did he make them for the right reasons? Food for thought.

I don't really have a favorite of the novels. I really love them all. The fifth was my favorite for a long time but I just can't chose anymore. I think maybe I do prefer the later ones though, despite my quibbles with their romanticism that I mentioned above. J.K. Rowling could have definitely done some tighter writing to make them shorter though... maybe left out some mushy yuck? ;) The first one though always has a special place in my heart. I feel it has more of the british humor in them that I so enjoy. It's lighter, it's more magical, it's that first glimpse into the whole magical world that Harry is entering and it's our first glimpse as well. That line "You're a wizard Harry" was the beginning of such a great adventure!

As for the movies I want to re-watch them again now that I've re-read the books but I don't really have time (which never seems to stop me though). However, from what I recall, I like the first and second, the third is pretty good but then as the books get longer the movies start having trouble accommodating, which isn't necessarily the filmmakers fault... there was a lot to incorporate into the films but maybe they should have done two parters with others besides the last. Four was okay, five made me mad and six didn't make me happier but I felt that the seventh was pretty well done as they did it in two parts. There was just too much left out of five and six and it came back to bite them later.  There was too much left out of all of them in my opinion and it came back to bite them for those too but especially in five and six. All in all though they are pretty good films. I am a book purist so don't listen to me when you want an opinion on a book to film adaptation as normally it's negative. ;) One specific note I want to make on them are that I think they didn't do justice to Ron's character and that makes me unhappy. :(

So there's my thoughts on Harry Potter. :) I'd love to hear your thoughts too so please comment!

Follow my blog with Bloglovin
Posted by Lois Tinúviel at 12:53 PM