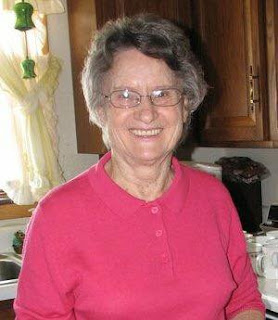 Almost exactly four years ago my grandma had a stroke. Last week she passed away. In a way it was a relief. She has suffered so much since her stroke and it gives me great joy to know she is not suffering anymore. I derive the greatest joy though from knowing that she is with Christ in heaven.
Grandma was an incredible women. She was the third of fifteen children and naturally helped raise the younger ones. She got her teaching degree and went on to teach a couple of years before meeting my grandpa and marrying him. Grandpa and her celebrated sixty years of marriage, had three children and fourteen grandchildren. Shortly after their sixtieth anniversary grandpa passed away. A couple months ago grandma got to rejoice in her first two great-grandchildren. Grandma found her greatest joy in caring for people. Besides faithfully serving her family, Grandma also served her church and community. She taught Sunday school for about fifty years and was involved in the children's ministry at her church in many other ways as well.
Growing up I remember how patient and self-sacrificing she was. When the family was together for a week she would make three full meals a day BY HERSELF for all twenty plus of us. It was only in the last couple years before her stroke that she would let any of us help her and even then only a little.
There's so much more I could say about my grandmother but I would just echo what my uncle said in her eulogy... Not one of us, her husband, children and grandchildren would be where they are today if it hadn't been for her. It is without a doubt that when she passed away God welcomed her into heaven saying "Well done, good and faithful servant."

Email ThisBlogThis!Share to TwitterShare to FacebookShare to Pinterest
Labels: Family