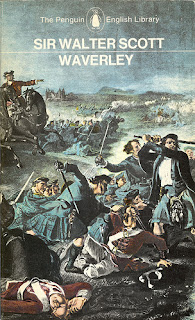 Synopsis from Goodreads: Waverley is set during the Jacobite Rebellion of 1745, which sought to restore the Stuart dynasty in the person of Charles Edward Stuart (or 'Bonnie Prince Charlie'). It relates the story of a young dreamer and English soldier, Edward Waverley, who was sent to Scotland in 1745. He journeys North from his aristocratic family home, Waverley-Honour, in the south of England (alleged in an English Heritage notice to refer to Waverley Abbey in Surrey) first to the Scottish Lowlands and the home of family friend Baron Bradwardine, then into the Highlands and the heart of the 1745 Jacobite uprising and aftermath.

After a great experience re-reading Ivanhoe last year I had high expectations for another of Sir Walter Scott's novels. Maybe I had too high of expectations or maybe it simply was not a good time for me to be reading it but nevertheless I ended up a little disappointed. Don't get me wrong, I did enjoy it. However I didn't enjoy it as much as I thought I would.
First off, I just wasn't that enthralled with the hero Edward Waverley. He was kind of a milk sop. He gets better though thankfully. He hasn't been out a lot in the world before the story starts and his view of the world is controlled by what he has read in books.
The other characters in the story I actually found more interesting than him. His two love interests were interesting, though I definitely preferred Flora, who of course he didn't end up with. I think that was for the best though.
Fergus Mac-Ivor was one of the most intriguing characters in the book though and while I agreed with him on little I found him fascinating.
Overall the book was good and I'm sure I'll come back to it at some point in my life, hopefully with a deeper appreciation.