For the audiobook challenge and the Classics Club I read (listened to) Bram Stoker's classic horror novel Dracula. 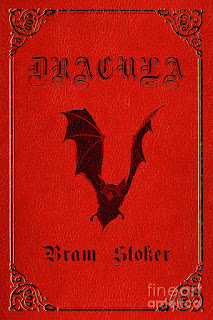 Goodreads Synopsis: When Jonathan Harker visits Transylvania to help Count Dracula with the purchase of a London house, he makes horrifying discoveries about his client and his castle. Soon afterwards, a number of disturbing incidents unfold in England: an unmanned ship is wrecked at Whitby; strange puncture marks appear on a young woman’s neck; and the inmate of a lunatic asylum raves about the imminent arrival of his ‘Master’. In the ensuing battle of wits between the sinister Count Dracula and a determined group of adversaries, Bram Stoker created a masterpiece of the horror genre, probing deeply into questions of human identity and sanity, and illuminating dark corners of Victorian sexuality and desire.

Going into this book I really had no idea what it would entail. Like most people I knew a little about Dracula the character but I soon found out I had no clue about the book. What took me the most off guard with it was that it all started out with Count Dracula wanting to buy.... a house! It sounded boring at first. It escalated quickly though. As the book goes on it becomes more and more disturbing and fascinating.
I really loved the characters in this story. Mina Harker was definitely my favorite but I also loved Dr. Van Helsing. All of the gentlemen that band together to eradicate Count Dracula are amazing actually.
Count Dracula is amply chilling and there were times in the book where I thought to myself "how are they possibly going to defeat him?" It's interesting to see how the character's perception of Count Dracula changes as the story goes on especially at the end when Mina's life is in the balance and they have to realize that Mina could become what they are fighting. It was sad and terrifying.
Overall I was impressed by this book and while I felt at the end it dragged a bit I really enjoyed it. Read or not? Read!