Growing up I watched the Swallows and Amazons movies all the time and when I was old enough I read them. How could I help but love them? Sailing? Adventures? Imagination? They make me want to be a kid again! I would highly recommend this whole series for children of all ages and it works well for boys and girls alike! 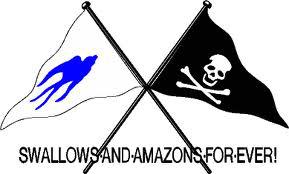 The series starts out with the introduction of the Walker family (aka the Swallows). The oldest is John, their leader, than it's Susan, the practical one, than Titty, the imaginative one, and then Roger, the youngest one who can be annoying and fun all in one. While on vacation they get permission to camp on an island that is on a lake. They have their own sailboat, the Swallow, that they use to sail the lake. While there they meat a "pirate" who has a houseboat on the lake and his two nieces Nancy and Peggy (aka the Amazons) who have their own sailboat, the Amazon. Adventures and fun ensue brought to life by Ransom's incredibly imaginative writing. 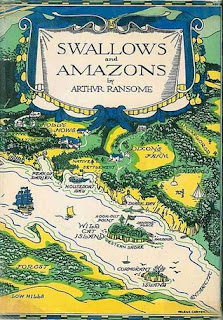 This might be the best of them all. The imagination is so perfect and every time they call adults the "natives" it cracks me up!

The Swallows and Amazons are back together for the summer holiday. Fun is planned for the summer but plans go awry when the Amazons' great aunt (aka the G.A.) come to visit and the Swallows wreck the Swallow. However, these intrepid explorers are still able to have fun when they discover a hidden valley dubbed Swallowdale. While I said Swallows and Amazons might be my favorite this is really close. The G.A. situation is just too funny! Also you see some great character development with John.

So it wasn't until many years after I originally read this book years ago and thought it was very weird that I found out that it was supposed to be a story Titty and the rest of the crew made up over Winter holiday. With that in mind, this book made much more sense with this re-read. It was basically a classic pirate story with a treasure hunt and who doesn't love that? It was a lot of fun and of course over the top but it was Titty "writing it" so of course it was! Much better the second time. :)

The fourth book in the series brings the introduction of two new characters. The twins Dick and Dot bring a new dynamic to the stories. Dick is the science geek and Dot loves writing stories. The Swallows and Amazons welcome them into their group as they enjoy the winter holiday. Instead of sailing and treasure there's a polar expedition to the "North Pole" planned across the frozen lake. However plans are put on hold when Nancy gets mumps! Just as fun and original as the others! 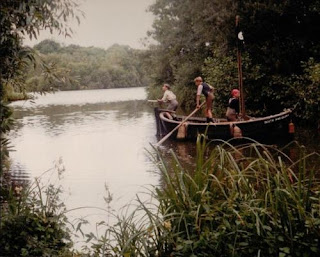 This book focuses on some new characters with the inclusion of Dick and Dot... who are semi-new characters to the series. Dick and Dot are visiting a friend of their mother's who lives in Norfolk. While there they team up with the Coot Club, a group of children who protect nesting birds. There's Tom Dungeon, Port and Starboard, the twins, and Joe, Bill and Pete (the Death and Glories). When a noisy and inconsiderate group of city dwellers moors their boat right by a coot nest, the coots are too afraid to return to their nest. Despite being asked to move, the "hullabaloos" (as the Coot Club dubs them) refuse to. Tom takes desperate action and lets them adrift, causing the hullabaloos to go to no bounds to hunt him down.
I like this one a lot but I still think it's a little over the top. I don't condone letting boats adrift, but I also understand why they did... it's complicated. ;)

The Swallows, Amazons and Dick and Dot decide to try for some gold speculating in the mountains while waiting for Captain Flint (aka Uncle Jim) to come back from abroad. With the help of pigeons to send messages, they make this summer full of fun even without sailing. However, they run into trouble when Mr. Squashy Hat seems to be dodging their every move.
So far I think this is the weakest link in the series but I couldn't help loving it. The whole conclusion to Mr. Squashy Hat was just too funny to not. :)


We Didn't Mean to go to Sea

The Swallows and their mother are waiting for their father to come back from his job in the navy. While waiting they decide to go on a sailing adventure with a new found friend. However, when a fog comes in and the boat comes unanchored the Swallows find themselves alone sailing on the high seas! With a title like that you know the mishaps in this novel are far more real than in the others. I feel like it's the most intense of them all. I felt like everything in the other books built up to it. John really becomes a man in this one as he takes on sailing the ship and Susan, even though she goes native every once and awhile, loosens up some. 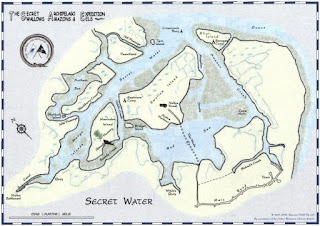 It's nice that Bridget the "ship's baby" finally gets to be included in the family's adventures. With the introduction of some new characters "the Eels" and our favorite Swallows and Amazons this story takes on a new and exciting setting. Mapping out a whole new bunch of island is tons of fun and of course there's the "human sacrifice". ;) It's also a great new location and a different terrain for them to be working with.

This is I think the longest of them all. This books takes us back to the Coot Club and Dick and Dot. When boats are mysteriously being set adrift everyone looks at the Coot Club to blame considering Tom's history of setting adrift the hullabaloo's boat. However the are innocent and out to prove it! This one is a little more like a mystery novel and is a lot of fun as they search for clues. It also gets tough for them as everyone assumes they are guilty and they have to take a lot of flack.

Another made up story by Titty and the crew including the Swallows, Amazons and Captain Flint (aka Uncle Jim). This one takes us into the China seas and pirates! However, this is not just any pirate, this is a highly educated female pirate who is determined to hold them all at her palace for the rest of their lives and teach them Latin. Very funny and original.

The Picts and the Martyrs 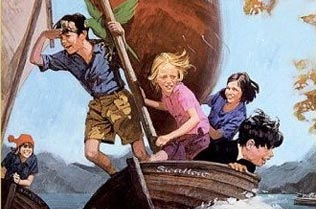 This book brings us the return of the G.A. (aka the Great Aunt). We have the Amazons and Dick and Dot but the Swallows are absent (though to visit soon!). When the Amazons' mother leaves for a short pleasure trip with Uncle Jim the Amazons and the twins plan a fun but not too crazy set of adventures while they're waiting for them to get back. However, the G.A. descends on the house when she hears of their woeful lack of a mother and Dick and Dot find themselves Picts hiding out in the woods while the Amazons (the Martyrs) have to put up with the formidable G.A. back at the house. However, they still manage in to slip in adventures while the G.A. is not looking, making for tons of fun!

The final book in the series! :( This book includes good old Captain Flint, the Amazons, the Swallows and Dick and Dot. While the crew is taking a sailing voyage along the Scottish coast Dick finds a very rare Great Northern pair of birds nesting. However, when a scientist who wants to shoot the birds to stuff and steal the eggs comes along, the children have to once again save the day... and the birds. This is probably my least favorite of the series but it is still a lot of fun.

Final note on the series. I could not recommend it enough! It's good clean wholesome fun that boys and girls alike will enjoy. Read them! :)