Book Review- The Sound and the Fury

Classic American novels are rarely my thing I've found. They're just too... Weird. But I'm getting ahead of myself! For the Literary Movement reading challenge, the Author A-Z challenge, the Mount TBR challenge, Alphabet Soup Challenge, New Author challenge and the Classics Club I read William Faulkner's The Sound and the Fury. 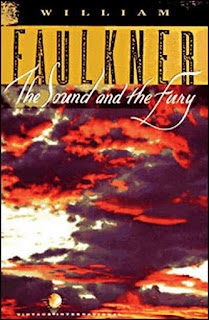 Goodreads Synopsis: The Sound and the Fury is the tragedy of the Compson family, featuring some of the most memorable characters in literature: beautiful, rebellious Caddy; the manchild Benjy; haunted, neurotic Quentin; Jason, the brutal cynic; and Dilsey, their black servant. Their lives fragmented and harrowed by history and legacy, the character’s voices and actions mesh to create what is arguably Faulkner’s masterpiece and one of the greatest novels of the twentieth century.

First off, I do not think it's one of the greatest novels of the twentieth century. That synopsis doesn't know what it's talking about right there.
The Sound and the Fury is written for the most part in a stream of consciousness style, which is incredibly confusing to read, though I'll admit unique, but reading a whole book like that is just too much in my opinion. It also jumps back inand forth in time randomly, :(
Then there's the Compson family themselves. They are all so messed up and even their slaves are brats. Benjy narrates the first part of the book and as he is, as the synopsis says, a manchild, the stream of consciousness style with his horribly jumbled up viewpoint is incredibly confusing. It was interesting getting a glimpse at a mentally ill person's thoughts though. You felt sorry for Benjy.
Now a little family tree information before I go on because I was so lost on this point for quite awhile. There's a Quentin that's a boy that's Caddy's sister and then there's Quentin that's a girl that's Caddy's illegitimate daughter she named after her brother.
So Quentin the boy gets to narrate a part to that was fine and interesting enough but I actually don't remember a lot of it... I'm not sure why it was in there.... I don't think it was important.
Then the final part is narrated by Jason. Now it's a testament to how awful the other characters were that I liked Jason the best (I guess except Benjy) because Jason was not a great guy either. Maybe I just liked him more because I was really fed up with Quentin the girl and how bratty she was so I was glad he was trying to do something about it.
I could not stand Mrs. Compson at all! She was kooks! Ahhhhh! She made me want to rip my hair out and then go give Quentin the girl the spanking that she wouldn't give her.
I didn't like their slaves very much at all either. They didn't work very hard and Dilsey kept defending Quentin! Ahhhh!!!!
I give The Sound and the Fury 2 ½ stars for originality and uniqueness as well as getting a small glimpse into a mentally ill person's mind but besides that I did not care for it and I doubt I'll be reading more William Faulkner in the future.