Book review- The Golem and the Jinni 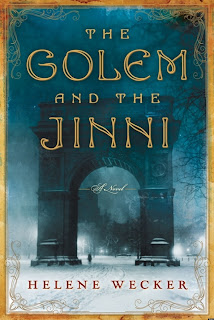 Synopsis from Goodreads: Chava is a golem, a creature made of clay, brought to life by a disgraced rabbi who dabbles in dark Kabbalistic magic. When her master, the husband who commissioned her, dies at sea on the voyage from Poland, she is unmoored and adrift as the ship arrives in New York in 1899. Ahmad is a jinni, a being of fire, born in the ancient Syrian desert. Trapped in an old copper flask by a Bedouin wizard centuries ago, he is released accidentally by a tinsmith in a Lower Manhattan shop. Though he is no longer imprisoned, Ahmad is not entirely free – an unbreakable band of iron binds him to the physical world. The Golem and the Jinni is their magical, unforgettable story; unlikely friends whose tenuous attachment challenges their opposing natures – until the night a terrifying incident drives them back into their separate worlds. But a powerful threat will soon bring Chava and Ahmad together again, challenging their existence and forcing them to make a fateful choice.

Overall I liked this book. It was an innovative idea and the writing was good. I'll be honest, the Jinni never really interested me that much and I just didn't relate to him. The Golem, on the other hand, I loved. She's awesome. I think my liking of each of them has to do more with their morality though than anything. The Jinni has loose morals and the Golem, I think because of the servile attitude of the Golems as well as being cared for by a Rabbi, has more morals. Their friendship is unlikely and definitely unique. That they are stuck in the same predicament is what draws them together. It is interesting how the book explores religions though it never really makes any conclusions. The religion it mostly focuses on is Judaism as Chava lives in the Jewish community. As a Christian I would disagree with most of it but it was interesting to read and I felt like I learned more about Judaism. I never felt like a lot happened in the book but it nonetheless was incredibly engaging. It read almost like a mythology. The ending was dynamic and left you wondering what happened to the characters in their future.
Overall I thought it was quite good and my major qualm with it is the Jinni going around having sex with people....I don't like reading that stuff. Besides that though it's a delightful book and I was impressed that it was Helene Wecker's first novel!